Reprinted from the Citizen.

Books by and about celebrities have a built-in audience. People are curious to read more about their favorite stars, how they got to be where they are, who influenced them and yes, even for some good old gossip.

Three recent books by and about celebrities have published, all different and interesting in their own way.

Leslie Bennetts “Last Girl Before Freeway”: The Life, Loves, Losses, and Liberation of Joan Rivers” is the lone biography here. Bennett covers Rivers’ entire life, where she was Joan Molinsky, to her rise as a stand-up comedienne, her successes and failures, to her eventual death in September of 2014 during what was supposed to be a simple surgical procedure. 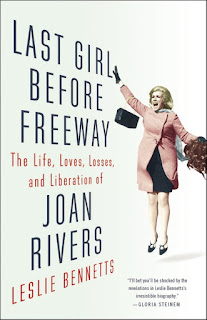 The book is comprehensive, and with a subject such as Rivers, who accomplished so much in her life, it flies by quickly. Joan Molinsky grew up in a household where her doctor-father, a kind and hard-working man, never made enough money for his wife, who feared poverty and always tried to keep up with the Joneses.

Joan was one of the first successful female stand-up comediennes, and the book is filled with anecdotes from younger female stand-ups who sing the praises of Joan’s generosity, even though Rivers often resented being called a mentor. She always wanted to be hip and relevant, and her fearless stand-up routines, which she continued weekly even up to her death, reflected that.

The early sections of the book rely on material from Rivers’ own writings (she wrote several books, including two memoirs), but once Bennetts interviews people who worked with Rivers, who knew her well, the book gives the reader a better overall picture of this complicated woman.

Rivers was driven, and her many self-reinventions, rising from the ashes of her failed Fox talk show after her very public falling out with Johnny Carson to become not only a successful stand-up comic but also a hugely successful businesswoman designing and selling jewelry in the fledgling QVC network, are an inspiration to anyone who has been knocked down in life.

Actor Bryan Cranston’s “Life in Parts” tells his story of a journeyman actor, where he began as a soap opera actor on “Loving” and became famous as the goofy dad on “Malcolm in the Middle”, and then hit the stratosphere playing high school science teacher-turned-drug-kingpin Walter White on “Breaking Bad”. 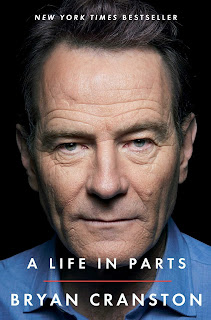 “Life in Parts” recounts his childhood, with a father who wanted to be a successful actor but failed, and then takes you through the life of an actor trying to make it. Cranston is successful because he treats acting as a craft, something to be finely honed.

He shares stories from his early days on “Loving”, including how he found out he was fired, and there is a little good gossip here. He speaks fondly of his days on “Malcolm in the Middle”, and there are a few chapters on “Breaking Bad”, with some interesting inside information for fans.

For anyone who loves the craft of acting, “Life in Parts” is wonderful book. Cranston has such a reverence for the work of acting, and reading about his process, about how much he cares about doing good work, is fascinating.

Trevor Noah is best known as the new host of “The Daily Show”, but his book “Born a Crime: Stories From A South Africa Childhood” is about his life growing up as the son of a black African woman and white Swiss man in South Africa. 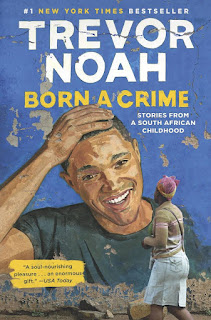 Noah is a terrific writer, and he grabs your attention right from the beginning. He grew up when apartheid was ending, after Nelson Mandela was freed from prison, but things didn’t get easier for South Africans right away. There was a strict caste system, and black Africans were pitted against colored Africans, and since Noah was half-white, he didn’t fit in anywhere.

“Born A Crime” gets its title from the fact that it was illegal for blacks and whites to marry, so his parents had to hide their relationship, and Trevor was never allowed to walk next to both of his parents.

The book is a really a love letter to his mom, who pretty much raised Trevor alone, although Trevor spent a lot of time with his grandmother. His stories of childhood are touching, funny and sad.

Anyone who likes a good memoir will enjoy “Born a Crime”. It gives the reader a look at a place many of us are unfamiliar with, yet his story of a mother who worked hard to give her son a better life is universal.
“Last Girl Before Freeway” by Leslie Bennetts-A
Published by Little Brown
Hardcover, $28, 433 pages

“A Life in Parts” by Bryan Cranston- A-
Published by Scribner
Hardcover, $27, 289 pages

“Born A Crime” by Trevor Noah- A+
Published by Spiegel & Grau