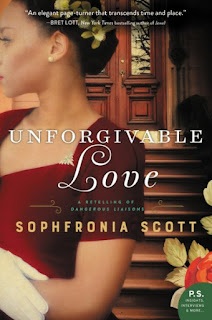 Author Sophfronia Scott is by her own admission obsessed with all versions (books and movies) of Les Liasions Dangereuses. When her friend screenwriter Jenny Lumet said that there should be a version of the story with an African American cast, Scott got to work.

Unforgiveable Love- A Retelling of Dangerous Liaisons is set in Harlem during the summer of 1947, when Jackie Robinson became the first black Major League baseball player, playing for the Brooklyn Dodgers.

Mae Malveaux is a wealthy heiress, her mother having made her money inventing a hair gel and using young Mae's picture on the packaging. When her best friend is torn from her, forced to marry in older man and move to Detroit, it is an event that changes Mae forever.

She doens't believe in love, she uses men's affections and throws them away when she is done with them. Valiant Jackson is a man who has a shadier reputation in Harlem- he is always seen in the clubs with a different beautiful woman every night, but Mae is the one woman he desires. He is obsessed with baseball, and follows Jackie Robinson's career rise.

When Mae finds an opportunity to gain revenge on a man who left her, she strikes a bargain with Val- if he beds Cecily, the virginal young woman (and Mae's cousin) who is to be engaged to the man, Mae will finally sleep with Val.

Much of the story takes place at Val's aunt's summer retreat in upstate New York. When Val arrives to begin his mission, he finds his aunt hosting Elizabeth, the lovely wife of a civil rights lawyer currently working down south.

Val decides to while away the time waiting for Cecily by playing a cat-and-mouse game with the honorable Elizabeth. He schemes to get her to into bed, but when he develops real feelings for her, and she for him, it shakes his world.

Even if you are familiar with the story of Dangerous Liaisons, Unforgiveable Love will still surprise you. Scott brings her characters to life, and 1947 Harlem is a terrific setting for this retelling. I also liked the role that baseball played in this story- Val teaching Elizabeth how to play the game is a unique and interesting plotline.

The denouement of the story is set in a church, which is an integral part of the Harlem community. It is a heartbreaking novel, one that had me gasping at times, but ultimately there is some redemption for some of the characters. I also liked how the author shows us that women can own their sexuality, but with that also comes a responsibility to themselves and others.

If you are a fan of Dangerous Liaisons,  you'll want to put Unforgiveable Love on your TBR list. I recommend it. It would make a terrific movie or play, and I found myself casting the roles in my head.

Thanks to TLC Tours for putting me on Sophfronia Scott's tour. The rest of her stops are here: