Three Great Titles for the End of Summer

It’s hard to believe that summer is almost over. If you want to get in some good last minute reading before the leaves begin to change, this month’s Book Report has a few suggestions.

Don Winslow is best known for his crime thrillers, (“Cartel”) set on the West coast. His latest novel, “The Force” is set in New York City, and it is a propulsive, action-packed crime novel that will leave you breathless.

Denny Malone is the leader of the Manhattan North Special Task Force, known as “Da Force”. They are the alpha cops, the ones you see on the news, making big drug, gun and gang busts, putting the bad guys behind bars and making Northern Manhattan safer. “If there was a secret Da Force didn’t know about, it was because it hadn’t been whispered about or even thought about yet.”

“Da Force” are supposed to be the good guys, but when the temptation of all that drug money and their desire to provide a good lives for their families collide, trouble follows. The novel opens with hero cop Malone behind bars himself in federal lockup with a big decision to make- protect his family or his partners.

The novel then tells how Malone got there, and it whips along at a breakneck pace. Winslow so submerges the reader into the grittier parts of Upper Manhattan, you actually feel like you’re right there along with him. And if you think only the cops are dirty, let’s just say that no one gets out of this unscathed.

Stephen King calls “The Force” “The Godfather, only with cops”, and that may be the best blurb I have ever read. It utterly describes the vibe you get from reading this heart-pounding book. Winslow dedicates this novel to the law enforcement personnel who lost their lives during the time he wrote the book, and names them all- the list is two and half pages and is a sobering beginning to this outstanding book, which I highly recommend. 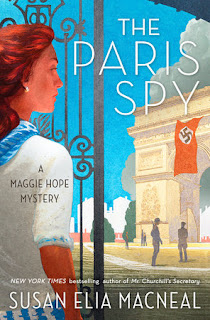 Her work is extremely dangerous, and when an agent who has valuable information about the pending Allied invasion is captured, Maggie and two of her colleagues must find that information and get it back to England, all while looking for the traitor in their midst.

Maggie must also deal with competing intelligence agencies who don’t trust each other, and she has a personal mission- find her missing sister, who was liberated from a concentration camp and hasn’t been seen since.

Maggie and her cohorts risk their lives, and there are many tense scenes in this outstanding entry in this historical mystery. At the end of the book, Maggie faces a troubling decision, one that will resonate in the next book, which I can’t wait to read.

MacNeal does impeccable research for her novels, and “The Paris Spy” is no different. She includes an Historical Notes section at the end, which is fascinating to any WWII history buff, and she gives the reader a list of books she consulted, in case you want to continue your own historical reading.

Taylor Jenkins Reid’s “The Seven Husbands of Evelyn Hugo” may put people in mind of Elizabeth Taylor. Evelyn Hugo was a glamorous movie star during the glory days of Hollywood, beloved by millions and married to seven men. She has been out of the limelight for years, and an interview with her is coveted by many people. 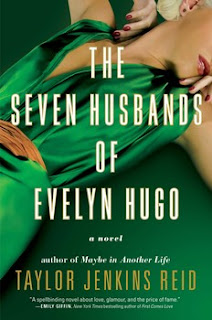 Only Hugo knows why she chose a relatively unknown reporter to secretly write her biography, each chapter about one of her seven husbands. Throughout the story, we find out that the love of Hugo’s life was not one of her husbands, but a complete surprise, a relationship she kept hidden from the public out of fear.

The characters in this fascinating novel are so well-drawn, particularly Hugo herself. She is a larger-than-life movie star and she jumps off the page as she tells her amazing story. It reminded me of Adriana Trigiani’s “All The Stars In The Heavens”, and if you are a Turner Classics Movie fan, “The Seven Husbands of Evelyn Hugo” is a must-read. It’s a heartbreaker.

“The Paris Spy” by Susan Elia MacNeal- A+
Published by Bantam
Hardcover, $26, 301 pages