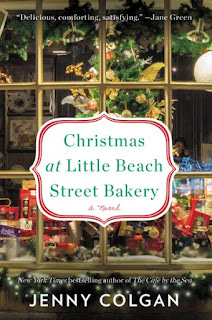 I've become a big fan of Jenny Colgan, having read The Cafe By The Sea and The Bookshop on the Corner, both set in Scotland. (I've talked so much about her books that I've gained her a few more readers at the Book Cellar where I volunteer.)

I needn't have feared, I was able to catch up quickly. Polly is the owner of Little Beach Street Bakery, after her previous life imploded when the fiance company she owned with her boyfriend went under, along with their relationship.

Now she is happy, waking very early each morning in the old lighthouse she lives in with her current boyfriend, Huckle, (an American chap who left his family in Virginia to become a beekeeper and sell honey) to make the pastries and breads that the villagers and tourists adore.

Polly's friend Kerensa is married to Reuben, a blowhard of a millionaire (billionaire?) who has a challenging personality, but loves Kerensa deeply. Kerensa makes a big mistake one night, and this causes a rift between Polly and Huckle, Reuben's best friend.

Polly was raised by single mum Doreen, and never knew her father who abandoned Doreen when she became pregnant. Doreen rarely leaves her home, preferring to watch television. Their relationship is somewhat strained since Doreen had hoped that her daughter would have more financial stability in her life, and Polly is sad that her mother seems so lonely.

I loved the characters in this town- Reuben is a hoot, and could have been a stock rich jerk, but Colgan makes him three-dimensional. His mother Rhonda is a real trip too. And how many books have a puffin as a character? (Yes, Neil is a bird.)

The story revolves around a snow storm that strands everyone at Reuben's mansion on Christmas Eve, where Polly has been talked into making pastries for Reuben's yuge holiday party when she would rather be snuggling with Huckle and Neil and relaxing.

There is a public proposal, snow sculptures, a trip to the hospital and a helicopter ride during the party, but fear not, all is resolved by the story's end.

Christmas at Little Beach Street Bakery is a perfect palate cleanser of a book. It's a lovely, light read, meant for curling up on the couch under a comfy blanket on a cold or rainy Sunday. It would make a wonderful stocking stuffer for a good friend this upcoming holiday season.

And if you like books with food references in them, this one will have your stomach rumbling, wishing that you lived close enough to the Little Beach Street Bakery so that you could sample some buttery croissants, Christmas twists, and homemade hot chocolate.

I have already gotten myself copies of the first two books in the series, and I can't wait to find out how Polly's story got her to this point.

Thanks to TLC Tours for putting me on Jenny Colgan's tour. The rest of her stops are here: