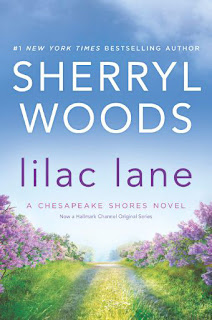 It's been awhile since I visited the O'Brien clan of Chesapeake Shores in Maryland. I was introduced to them in Sherryl Woods' delightful The Summer Garden, the 9th book in the series. (My review is here). The newest book, Lilac Lane, is the 12th in the series, and reading it is like visiting old friends.

Moira O'Brien's mother Kiera has just lost her fiance to a heart attack in Ireland. Moira convinces her mother to come to Chesapeake Shores and stay with her, her husband Luke and toddler Kate. Moira agrees to visit, and Luke asks her to act as a consultant in his Irish pub, to help give customers the authentic Irish experience.

This doesn't sit well with Bryan Laramie, the chef at the pub. Bryan is an experienced chef, having worked in New York and Baltimore, and the last thing he wants is another family member putting in her two cents on his established menu. (He had enough of that with the O'Brien matriarch Nell.)

Kiera is as stubborn and outspoken as her daughter Moira, and Bryan and Kiera get along like oil and water. But the matchmaking O'Brien clan (especially Nell and her son Mick, who would give Dolly Levi a run for her money) see sparks between the two and scheme to push the two together.

Bryan hasn't dated much since he moved to Chesapeake Shores, he mostly keeps to himself. When Kiera moves into a small cottage next to Bryan, their relationship turns to friendship, and maybe even more.

Meanwhile, Megan works hard to convince a reluctant Moira to take on more gallery showings of her photography across the country, Kiera enjoys the morning gatherings of the O'Brien women, Nell convinces Bryan and Kiera to compete against each other in an Irish stew cookoff at the Harvest Festival, and a young woman from Virginia comes to town to try and find her biological father.

I truly enjoyed coming back to Chesapeake Shores, and Bryan and Kiera's budding romance between two mature adults who aren't in their 20s is a refreshing change of pace. I'm from an Irish-American family, and I laughed at the raucous O'Briens and all of their teasing and scheming and getting involved in everyone's business.

Even though I haven't yet read #10 and #11 in the series, I didn't feel lost at all; I was able to pick right back up with the O'Briens. Sherryl Woods' lovely novels are the basis for the Hallmark Channel's Chesapeake Shores series, and now I will be catching up with that on-demand. (I've also started picking up the rest of the books in the series- that's how much I love these O'Briens!)

If you like family stories, adult love stories and books featuring food (I'll be making Irish stew just as soon as the cooler weather gets here), Lilac Lane is a great book to add to your TBR list.

Thanks to TLC Tours for putting me on Sherryl Woods tour. The rest of her stops are here: