You All Grow Up and Leave Me by Piper Weiss 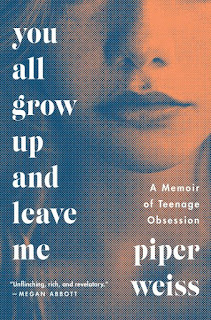 I don't remember much about the 1993 true story told in Piper Weiss's memoir You All Grow Up and Leave Me. Weiss grew up in the wealthy enclave of the Upper East Side of Manhattan, and although her family did not come from money, she and her older sister attended one of the tony private girls' schools that dot that section of New York City.

Piper was not tall and blonde like most of the girls; she was barely five feet tall, and her wild curly hair stood out from the crowd of stick straight hairstyles of her classmates. Piper's mom wanted her to have something to give her confidence, like her sister, who studied acting. When a popular local tennis coach agreed to give Piper private tennis lessons because he thought she was a good tennis player, Piper's mom was excited.

The coach was Gary Wilensky, who taught tennis at the prestigious Brearley School, and gave private lessons to girls whom he thought had potential to go professional. This was the era of Monica Seles and Stefi Graf, and Wilensky wanted to coach a girl who could be that good.

Wilensky worked hard to get the girls and their families to like him. He would take the girls out to lunch after Saturday lessons, sent them Valentine's cards, and ingratiated himself to their families.

He was also argumentative, and high school friends recalled that his girlfriends sometimes had unexplained bruises. He was fired from several jobs, including from tennis camps in the Catskills. He was an odd, lonely, unmarried 50 year-old man who longed to have a family of his own.

In 2016, Piper Weiss is a journalist, and she decides to investigate Gary's 1993 death and the incident that preceded his death. It involved two women- a teenage girl he coached and her mother. Slowly, Weiss reveals more information about the incident, until the end, when she describes in detail what happened. It is heart-pounding.

You All Grow Up Without Me is also about Piper in 1993, and how difficult her teenage years were for her. I think most women can relate to her insecurities and anxieties she talks about. One incident when a boy she likes calls her for date only to discover that he called the wrong girl is heartbreaking, and again, something relatable to all.

Weiss writes honestly and from the heart, and she looks for answers as to why Gary Wilensky ended up the way he did as well as to why she, at age 38, is still unmarried with no children. I live near the neighborhood where this story took place, so I had an added level of interest here, but people who like true crime and coming-of-age memoirs should put You All Grow Up and Leave Me on your to-be-read list. I can also guarantee that you will Google Gary Wilensky to discover more about him.

Thanks to TLC Tours for putting me on Piper Weiss' tour. The rest of her stops are here:

Labels: memoir, nonfiction, Piper Weiss, true crime, William Morrow, You All Grow Up and Leave Me