Book Club Girl's A Night Out

Last week I had the pleasure of attending Book Club Girl's A Night Out, featuring authors Kate Quinn (The Alice Network) and Jennifer Robson (Goodnight From London), along with Saskia Marrleveld, who narrated both audiobooks. 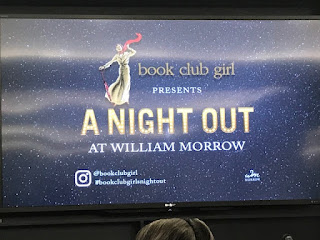 The event was held at the HarperCollins offices in downtown New York City, and it was my first visit to the beautiful building. The main office area is very open and spacious, and there are the usual display of Harper books along the walls that one would expect, along with some special displays, like a cool antique letterpress, and a display dedicated to Harper Lee's To Kill A Mockingbird and Go Set A Watchman. (I was particularly interested in the Harper Lee display as she lived a few blocks from where I live in New York City.)


They had a huge spread of snacks and beverages to welcome the many book club members in attendance. After we all settled into a large conference room, the discussion began.

It was an evening dedicated to historical fiction, so there were more than a few questions about research. Both authors do a great deal of research for their books. Kate Quinn had previously written book set in ancient Rome, so her foray into WWI and WWII was new to her.

There was a real life Alice Network of spies in WWI, and the women who made up the network were the most successful spies at that time because women were generally not noticed. Men would feel free to speak about sensitive topics in front of them because they would never suspect that a woman could possibly be capable enough to be a spy. (That elicited groans of recognition from the mostly female audience). Quinn also got a laugh when she mentioned that espionage was one of the world's oldest professions. 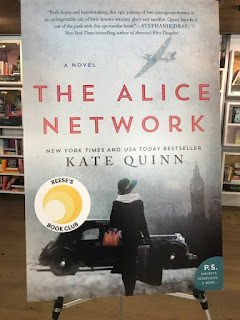 Jennifer Robson was writing a book, and her main character wasn't working. Her editor suggested that she write a book about her grandmother, a woman who worked in a newsroom in Canada. She began by running errands, filling scotch bottles for the male reporters, and eventually worked her way up the editorial ladder when many of the men went off to war. 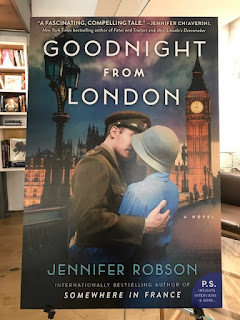 From that, Robson's character of Ruby, a female journalist who finds herself in the middle of London in WWII, was born.

The authors discussed their own book clubs, how much they enjoy speaking and Skyping with book clubs, how much of their research doesn't make it into their books, the embarrassing questions that readers ask romance writers about their own sex lives, the possibilities of sequels, and what comes first- a great story or a great idea?

They spoke about their writing process, and the importance of just "putting your bum in the chair" and writing for five minutes everyday in a notebook to get started.

Quinn previewed her upcoming book, The Huntress, which has a triple timeline. It's partially set during WWII, and features a teen girl photographer, and a female Russian fighter pilot who joins forces with an English journalist to find a Nazi hiding in the United States. It's also based on a true story, and one of The Alice Network characters has a cameo appearance.

Robson's new book, The Gown, is particularly timely. It's about the women who made Princess (now Queen) Elizabeth's wedding gown. With so much interest in the recent royal wedding, and the Netflix series The Crown, this one is sure to have a lot of readers.

Saskia Maarleveld spoke of how she got involved in narrating audiobooks (she went to NYU for acting and decided it wasn't for her), her process, the luxury of being able to work in yoga pants from home, and her expertise in doing the many accents required for some books. She narrates 60-70 books a year, which impressed the audience.

The audience was gifted with early galleys of the upcoming books, The Huntress and The Gown, as well as The Alice Network and Goodnight From London, and had the opportunity to get their books signed. It was a fantastic event, and we all look forward to more of these in the future.

Thanks to Jennifer Hart (the Book Club Girl) and her wonderful William Morrow team, they made the evening memorable.