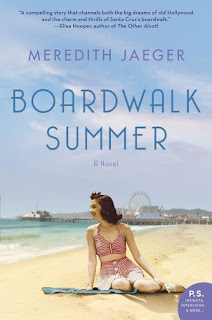 Meredith Jaeger's novel Boardwalk Summer tells the story of two women in two different time periods. In 1940, Violet Harcourt longs to be in the movies, but her marriage to a violent man thwarts her dreams. In 2007, Marisol Cruz's hopes of a college education in history ended when she became pregnant.

No one knows that Violet's husband Charles, a club owner in Santa Cruz, beats her physically and emotionally abuses her. When Violet decides she can no longer take it, she hitches a ride to Hollywood to try her luck at acting.

The Hollywood she discovers is not the one where she is discovered in a soda shop. Jaeger shows us the seedier side of Hollywood in the 1940s. Thousands of young women, all vying for stardom, are taken advantage of by men who use them to get what they want, and then abandon them.

Marisol is raising her young daughter Lily with the help of her parents. She waitresses at a diner, and when the opportunity arises to work for the local historical society, she is excited. Marisol's grandfather, Ricardo Cruz, grew up working on local farms with his family until he became a trapeze artist and performed at the boardwalk on Santa Cruz.

Marisol idolized her grandfather and when she went through his personal papers, she discovered that he was friends with Violet Harcourt, the Miss California winner who left for Hollywood and died mysteriously a few months after her return home.

With the help of a young man Marisol met at the diner, she discovers her family's connection to Violet and sets out to find out why Violet died.

What I found most interesting about Boardwalk Summer is that the setting is unique. Not a lot of books are set in Santa Cruz, so we get to see a different place. You can almost smell the ocean and taste the cotton candy while reading. Marisol's interest in local history, and her grandfather's career as a trapeze artist, is fresh as well.

I also liked the way Jaeger sprinkled real Hollywood figures into the storyline. Famed director Ernst Lubitsch has a cameo in the book, in a key scene involving Violet.

The author drops in some hints as to where the story is going, so careful readers will pick up on those and be rewarded for their prowess. There are two big twists at the end- one I found a little too convenient- that the reader may or may not see coming.

Some of Jaeger's storylines have relevance today. Marisol's grandfather is originally from Mexico, and she still faced nasty racially-charged comments from people, and the issue of women in Hollywood being sexually harassed back in the 1940s unfortunately still continues today as we see in the #MeToo movement.

Thanks to TLC Tours for putting me on Meredith Jaeger's tour. The rest of her stops are here: