The Solace of Water by Elizabeth Byler Younts 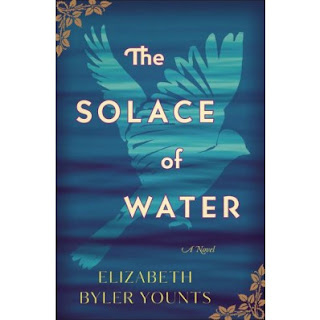 Elizabeth Byler Younts' novel, The Solace of Water, opens with Delilah at the grave of her son,  suffering an unbearable grief. Her preacher husband Malachi softly approaches her as she is filling her empty purse with dirt from his grave, which she will bring with her to their new home in Sinking Creek in Pennsylvania Amish country.

Delilah blames her fourteen-year-old daughter Sparrow for her son's death, and although we know don't the exact circumstances, we know that Sparrow blames herself as well. Delilah has turned her back on Sparrow, and refuses to offer comfort to her daughter.

Emma is an Amish woman, married to John, a respected deacon in their church. Emma is sad as well. She lost a baby girl to a miscarriage years ago, and her grief is still fresh. Her husband John is an alcoholic, a secret that Emma keeps from the congregation for fear that they will be shunned by their closeknit community.

Emma also has a secret of her own that she is carrying, one that troubles her daily.

While walking in the woods near her home, Emma finds young George, the twin brother to the son Delilah lost. Sparrow turns to Emma for the kindness that her mother can't seem to give her, and she becomes involved with Emma's son Johnny.

Malachi gets a job working in the only white grocery store where blacks are allowed to shop, although they have a separate produce section and shopping carts.

The Amish community does not discriminate against the black members of the community, but they stick to themselves, preferring not to socialize with anyone who isn't Amish. Emma breaks that tradition because she likes Sparrow, and teaches her how to do laundry and sew.

When Sparrow finds Emma in a bad state, she runs to her mother for help, and Delilah discovers that Sparrow has been spending time with Emma. She helps Emma and they become friends, finding that they have a shared sense of grief that no one else understands.

The title of the book comes from this line: "It was like lamenting over thirst while the solace of water was close at hand". Emma says that "no one wanted to talk about why we drew invisible lines around our hearts and expected everyone to stay away."

There is one incredibly tense scene that could have been from "The Real Housewives of Sinking Creek" where Delilah confronts Emma about the secrets she has been keeping, unaware that her own daughter has secrets of her own that could endanger her life.

The Solace of Water tackles so many themes- racism, grief, friendship, forgiveness, secrets, religion- that it would make a wonderful book club pick. There is a lot to discuss here.

Younts is a wonderful writer, she has several turns of phrase that made me stop and reflect. She tells the story through the words of Delilah, Emma and Sparrow and each woman speaks with a distinct voice. She also gives the reader a look into the Amish culture, something I was not overly familiar with. I recommend The Solace of Water for those who like a serious story.

Thanks to TLC Tours for putting me on Elizabeth Byler Younts tour. The rest of her stops are here: