The Daisy Children by Sofia Grant 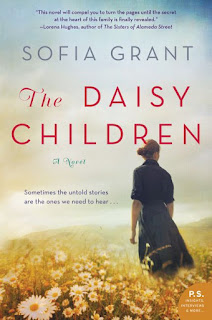 Author Sofia Grant's novel The Daisy Children begins with a true event. In 1937, an elementary school in New London, Texas, exploded, killing nearly 300 people, mostly children. Her storyline alternates between the aftermath of that event, and the toll it took on one family, and present day Boston.

In Boston, Kate has just lost her job, and she and her husband are having problems conceiving a baby. Kate's husband works crazy hours at his job, and has become more distant. When Kate gets a letter informing her that she has inherited something from her late grandmother Margaret in Texas, she is shocked. She only met the woman once, and her own mother Georgina didn't get along with her mother, seeing her rarely, and often expounding about what a terrible mother Margaret was.

Margaret was what was known in New London as a "Daisy Child." After the horrific explosion, eleven babies were born to families who lost children there. The mothers of those children formed a support group, and worked to keep the memories of their deceased children alive.

Margaret didn't get along with her mother Caroline almost from the beginning. She was headstrong, and mean to other children, lording it over them that her father was an important oil man, and their fathers merely worked for hers.

She fell in love with Hank, the older brother of her best friend, and a survivor of the explosion. Hank suffered from what we today would call PTSD, and he had problems with alcohol and anger issues. Margaret thought her love could help him.

Caroline was dead-set against Margaret marrying Hank, and did everything in her power to turn Margaret against Hank. When Margaret had a daughter of her own, Georgina, she got a taste of her own medicine. Georgina clashed with her mother, and counted down the days until she could leave home.

Meanwhile, Kate meets her cousin Scarlett in Texas, and learns a little more about her grandmother as they go about cleaning Margaret's house. Margaret is described by a neighbor as "mean as a wasp and tough as a skewed skunk".

Secrets are uncovered, including a whopper of a one near the end that I didn't see coming. Young  Margaret states early on "if there was one thing (she) had learned in her eleven years on earth, it was that everyone had something they were hiding." Truer words were never spoken.

Grant describes the day of the explosion as Caroline tells Margaret what happened. The descriptions of parents rushing in to look for their children brings to mind the horror of the Newtown massacre and 9/11. Caroline's husband found his daughter Ruby's body, and he "identified her by her shoes that he'd helped her buckle that morning." What a heartbreaking sentence.

The Daisy Children is about the often painful relationship between mothers and daughters, and how we never really know what is going on in someone's life, even if we are close to them. This book may make you want to sit down with your grandmother, and ask her to talk about her life. You may be surprised. If you enjoy books about mother/daughter relationships, put The Daisy Children on your reading list.

Thanks to TLC Tours for putting me on Sofia Grant's tour. The rest of her stops are here: