Another Woman's Husband by Gill Paul 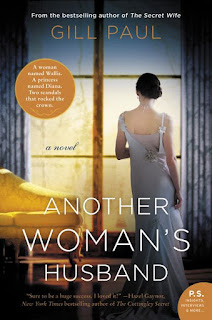 Wallis Simpson and Princess Diana were both women who ended up married to men who one day were destined to be the King of England. They got there in different ways and never knew each other, but author Gill Paul puts their stories together in her brilliant historical novel, Another Woman's Husband.

Their stories are told through two other women- Mary Kirk, a real person who was best friends with Wallis Simpson since childhood, and Rachel, a fictional young British woman who owns a vintage clothing consignment shop.

Rachel's documentary filmmaker boyfriend Alex has just asked her to marry him in the beautiful city of Paris on August 31st, 1997. As they are driving through a tunnel, they come across a car accident, with a gravely injured Princess Diana in the back seat of a car and dozens of paparazzi ghoulishly snapping photos of her.

Alex tries to help, and he finds a small bracelet on the ground, which he picks up and gives to Rachel for safekeeping. They are horrified by the aftermath of the crash.

Back home in England, the entire country is mourning the loss of Diana. Her death shocked the entire world, and Alex believes that he can make a good documentary about her death, especially when conspiracy theories pop up about whether she was murdered or it was just a tragic accident.

In 1912 Virginia, teenage Wallis Warfield and Mary Kirk meet at a summer camp for girls and become fast friends. They end up at the same boarding school in Baltimore and become even closer.
Mary is the prettier of the two, but Wallis is the wilder one. She is an outrageous flirt with the boys, and Mary takes a backseat to her more adventurous comrade.

As the years go by, Wallis marries a war pilot, and Mary marries a romantic French pilot. When Wallis' marriage falls apart due to her husband's alcoholism, Mary is there for her friend. When Wallis' father, stepfather and mother all pass away, it is Mary who picks up the pieces of her friend's life.

When Wallis begins an affair with a friend of Mary's, Mary is appalled, but doesn't end the friendship. Wallis and her new husband move to England, and Wallis becomes close to the Prince of Wales, the future King of England.

Their relationship is scandalous, upsetting Wallis' husband and Mary, who finds her friend's behavior unacceptable.

Another Woman's Husband is a terrific book, especially for Anglophiles and fans of shows like The Crown. Mary and Rachel's stories are fascinating, and telling Wallis and Diana's stories through these women adds a unique element to the novel.

Many times dual timeline stories can be uneven; one story is much more interesting than the other. In Another Woman's Husband, I found all four women intriguing and couldn't turn the pages fast enough to find out what would happen next.

Fans of vintage fashions will get an added element of enjoyment through Rachel's storyline as we read about the fabulous clothes she sells in her shop. And after reading Another Womans Husband, I will be looking for more books about Wallis Simpson- what a complicated woman she was!

I highly recommend Another Woman's Husband.

Thanks to TLC Tours for putting me on Gill Pauls' tour. The rest of her stops are here: