When the Men Were Gone by Marjorie Herrera Lewis 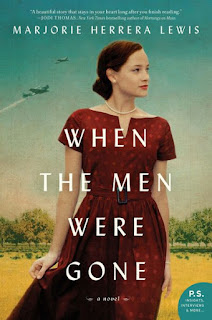 Football season is upon us and if you are a fan of the game and fiction set during WWII, Majorie Herrera Lewis' When the Men Were Gone will hit the spot. It's 1944 in Brownwood, Texas, where football is king and WWII has taken its toll on the small town.

When their football coach is tragically killed in action in France, and the replacement coach up and enlists after his brother is taken as a POW, it looks like the football season will be cancelled. This greatly upsets Assistant Principal Tylene Wilson.

In addition to being a big football fan since she was a little girl, Tylenes fears that without football to keep the senior boys in school, they will enlist in the armed forces and go to war a year sooner than if they stayed in school.

Brownwood is located near an airfield where the bodies of the soldiers killed in action are returned. The people of Brownwood learn to fear the sound of the planes overhead that mean another of their young men are aboard.

When it looks like no one else will do it, Tylene proposes that she be allowed to coach the team. This causes an uproar in the community; many people, especially men, are apoplectic over it. Some of the players are afraid of the scorn of opposing teams and refuse to play.

Eventually Tylene manages to win over enough of the players, and the team prepares to take the field for their first game. When word gets out in the Texas football community, Tylene is the the subject of newspaper and radio stories. (Imagine if it were today, and she were subjected to online harassment that this would engender.)

The last section of the book is gripping, as Lewis describes Tylene's first game in vivid detail. You  feel like you are right in the stands with the entire town of Brownwood, holding your breath with each play.

If you are a fan of the dear, departed TV series Friday Night Lights, When the Men Were Gone is a good read for you. It's also a good read for high school young women interested in seeing a strong female protagonist in a story that is not set in a dystopian future but a realistic past.

Thanks to TLC Tours for putting me on Majorie Herrera Lewis' tour. The rest of her stops are here: