Courage Between Love and Death by Joseph Pillitteri 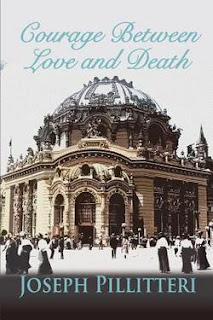 Joseph Pillitteri's novel, Courage Between Life and Death, appealed to me for two reasons- it is set in Buffalo (I'm from down the road in central New York) during President McKinley's visit where he was assassinated, and the main character is from a large Irish family.

Elspeth Shaughnesshey is a young nurse who feels lucky to have found a job working at the hospital at the Pan-American Exposition. Tourists have flocked to the Pan (as it's called) and although much of the day is dealing with children who have fallen and need stitches, it's an exciting place to be.

From a poverty stricken Irish family, Elspeth has seven family members she has to help support since her Da died. He owned the bar they lived above, but the bar has fallen on hard times. Her mother sewed beautiful dresses for wealthy women, but made little money from it.

The family is facing eviction, and six-year-old Katie is very sick. While handling all that, Elspeth also has to deal with the many doctors at the hospital who treat the nurses poorly. Dr. Kingdom fancies himself to be the smartest, most stylish doctor around. He also verbally abuses the nurses.

Dr. Gunner is kinder to the nurses, and some of them have a crush on him, like Harriet, Elspeth's friend, and a very competent nurse.

There is a charming party scene where President McKinley dances with Elspeth. I didn't know much about McKinley, but the author imbues him with a kindness and sense of humor. His wife is also a wonderful character who loves her husband very much.

The hospital scene where the doctors and nurses are desperately trying to save McKinley is gripping, and reading about nursing and hospitals in 1901 is fascinating. The race against the loss of sunlight in the operating room to finish the surgery was a page-turner.

I always like to find one fact in a novel that is interesting and new to me. In this book, it's that women will often have their wedding dresses turned into bassinette covers for their babies. What a lovely way to reuse a wedding dress!

The author's note at the end gives the reader some factual information that adds to the reality of the novel, including a photo of the head of the Pan hospital, Dr. Roswell Park, who went on to found Rosewell Park Hospital, a reknowned cancer hospital in Buffalo.

If you are a fan of historical fiction, Courage Between Love and Death is one to put on your to-be-read list. So many books cover WWI and WWII, this 1901 western New York setting is a refreshing change of pace. Anyone who is a nurse will enjoy reading about Elspeth's days at the hospital and what nursing was like back then. Fans of Charles Todd and Jacqueline Winspear will like this one.

Thanks to TLC Tours for putting me on Joseph Pillitteri's tour. The rest of his stops are here: