September Books From the Book Expo

Continuing in my series of posts from the BookExpo, I'm posting about the books I picked up at the Book Expo in June. September is a big month for publishing, and I got nine books that I'm looking forward to reading. 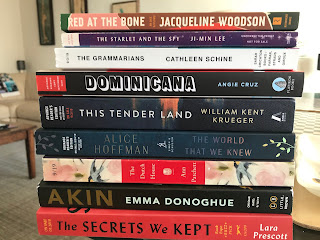 Jacqueline Woodson's novel Red at the Bone is described as "an extraordinary novel (that) uncovers the role that history and community have played in the experiences, decisions, and relationships" in "two families from different social classes joined together by an unexpected pregnancy." It tells the story of 16-year-old Melody and her relationship with her parents and grandparents. It's getting rave reviews.

The Starlet and the Spy by Ji-Min Lee is a slim historical fiction set in Korea immediately following the war. Alice is a translator for the American forces when she meets Marilyn Monroe, who is in Korea on a USO tour. The two women make a connection and it changes Alice's life.

Cathleen Schine's novel The Grammarians introduces us to twins Daphne and Laurel, who are obsessed with words. One grows up to become a poet, the other a famous language columnist. You know this book will be filled with beautiful language.

Dominicana is Angie Cruz's novel that was inspired by her own mother's story.  Ana is fifteen years old when she is married off to a thirty-year-old Juan who takes her from her home in the Domincan Republic in 1965 to move to New York City. Ana's family hopes that Ana will be able to bring them all to the United States, so Ana lives with her unhappiness for her family's sake.

William Kent Krueger's novel This Ordinary Land is set during the Great Depression and tells the story of four Native American orphans who escape from the school where they were sent to live, and make their way across the country, encountering others who are also lost souls.

The World We Knew is Alice Hoffman's highly-anticipated new novel. Set in Berlin in 1941, it's about a young girl sent away by her mother to escape the Nazis. She meets a rabbi's daughter, who creates a golem to protect the young girl. Fans of The Book Thief will like this one.

Ann Patchett's newest novel, The Dutch House, has been getting fantastic reviews. Set over 50 years, it tells the story of the Dutch House, a hugh estate outside Philadelphia, and the two siblings who grew up there and then were banished by their stepmother. Patchett never disappoints and I'm looking forward to reading this one.

Akin is Emma Donoghue's latest novel, about a retired chemistry professor who receives a phone call that he has an eleven-year-old nephew who is immediate need of a caretaker. He agrees and takes the young boy on his planned trip to France to discover more of his family history.

Lara Prescott's debut novel, The Secrets We Kept, was chosen as one of the BookExpo Buzz Books. It's about an attempt by secretaries recruited by the CIA to help smuggle the novel Dr. Zhivago out of Russia. This one has been talked about by everybody.

I've got to get busy catching up with all these great September books.