The Sweeney Sisters by Lian Doan 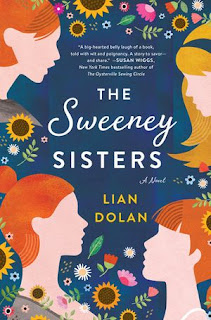 I love a good sister story and Lian Dolan's The Sweeney Sisters is a great sister story. When Bill Sweeney, a giant of the literary world, passes away, his three daughters- Eliza, Maggie and Tricia- reunite in their postcard perfect hometown of Southport, Connecticut to plan his funeral.

Liza lives in Southport and owns a successful art gallery. "She had been raised well and married better", wife to the successful Whit and mom to two teenagers. She is efficient and organized, and her home is a showplace where everyone gathers for a Thanksgiving, with each course timed to perfection.

Maggie is the second born, known as 'Mad Maggie' in her younger days. A freespirit, she is an accomplished artist whose paintings sell well in Liza's gallery. She has dated and lived with many men, including a Hollywood director who treated her badly. Maggie "excelled at emotional intelligence, " she was "the glue that held the whole family together".

The girls lost their beloved mother Maeve to breast cancer when they were teens, and now they were orphans. When their father's best friend and trusted lawyer Cap tells the sisters that there is not much left in the estate and that they need to sell the family home and find their father's last work, a memoir that he had already received an large advance for, they band together.

At the sendoff party for their party, they see an unfamiliar woman in the crowd. Serena is a Washington journalist who grew up in their neighborhood, although she is a few years older than the Sweeney Sisters. She is there because she ran a DNA ancestor test and discovered that she is also a daughter of Bill Sweeney.

What does Serena want? Is she after any family money, a good news story, or both? Did Bill know he had another daughter?

The Sweeney Sisters is a gem of a novel. It's got humor and warmth, and I laughed out loud several times, something that is sorely needed these days. The sisterly dynamics feel very real, and if you have sisters or wish you had sisters, this is a book that will touch your heart and bring you joy. I absolutely adore The Sweeney Sisters and give it my highest recommendation.

Thanks to William Morrow for providing a review copy.