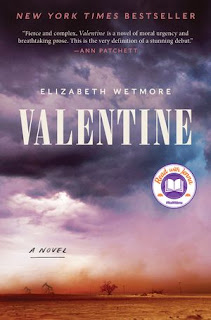 Elizabeth Wetmore's debut novel, Valentine, takes place in West Texas in 1976. It's oil country, and a hardscrabble place to be. The story begins with Gloria, a 14 year-old Mexican girl getting into a truck with a man she doesn't know.

Gloria is sexually assaulted all night long and beaten but manages to escape and make it to an isolated ranch house where a very pregnant Mary Rose is alone with her young daughter. Mary Rose takes Gloria in, and when the attacker comes looking for Gloria, Mary Rose holds him at gunpoint until the sheriff arrives.

Valentine tells the story of how this event affects the women in Odessa. Mary Rose moves with her daughter into town, fearful of living so far from anyone else, while her husband stays at the ranch. She has agreed to testify against the young man, who comes from a well-to-do family who has gotten him out trouble more than once. The nightly phone calls threatening her only make her more determined to testify, even though her husband is furious at her for doing that.

Mary Rose moves onto the street where Corrine, a recently widowed retired teacher lives. Corrine and her husband saw Gloria get into the truck with her attacker, and not stopping her haunted Corinne's husband.

Corrine is grieving, drinking hard and avoiding all contact with anyone, except for ten-year-old Debra Ann. Debra's mom ran away and Debra spent a lot of time with Corinne's husband. When the young girl finds a homeless Vietnam vet, she helps him, bringing him food and keeping him company.

Karla is a single mom who works as a bartender at the local bar/restaurant. She began as a waitress, where she was routinely harassed by the many men who came in for lunch and dinner. It's the only job where she can make enough money to support her child, so she must put up with their behavior, dodging the more dangerous men.

Suzanne is a successful Avon saleswoman, the ultimate room mother who knows how to work a room. She came from "trash" and strategized her way to becoming one of the most respected women in town. She has a will of steel, and while people may underestimate her, it is at their own peril.

The characters in Valentine are so compelling, and the story so powerful, it is a remarkable debut. I found myself drawn to Corinne and Mary Rose especially. Corinne's deep grief is palpable on the page, and Mary Rose's anger at what happened to Gloria fuels her desire to get justice for the young girl, and protect other young girls from a similiar fate.

Though the men run the world in Odessa -"You raise a family in Midland, but you raise hell in Odessa" is a common theme- it's the women who must deal with this harsh world the men have created. They face dangerous sexism and racism. Each of these women have to figure out how to survive and thrive, support each other, and make the world better for the young girls coming up behind them.

Valentine gets my highest recommendation, it's one of the best books I have read this year, and it is the Read With Jenna Today Show pick for April. It's suggested for fans of Barbara Kingsolver and Elizabeth Strout, and as I love both of those authors, I highly agree with that.

Thanks to Harper Collins for providing a review copy. 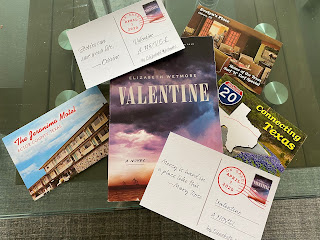 Posted by (Diane) bookchickdi at 5:11 PM