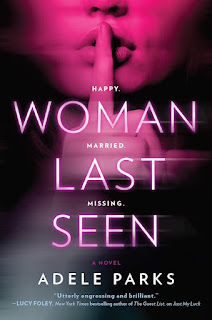 Much like her last novel, Just My Luck, Adele Parks latest novel, Woman Last Seen, has twists and turns that the reader may not see coming, even if she is an experienced domestic suspense novel reader.
Leigh is a young woman who sees a handsome man with his young sons at a park. When the younger son falls off a slide, Leigh rushes to his aid when it appears the father is unable to render help. Leigh accompanies the family to the hospital and soon she and Mark, the father, begin dating.
Flash forward, Leigh and Mark have been married for years, and Leigh is a loving stepmum to the two boys. She works out of town three days a week, returning for four days to care for her family. They have a comfortable, happy family life until the older son, Oli, has become surly and angry with Leigh. Is it just typical teenage behavior or something more?
After Mark and Leigh have a fight, she heads off out of town for work. When she doesn't return on Thursday, and the family can't reach her by phone, they call the police. DCI Clements and her eager partner come to investigate, but get nowhere.
Soon another man, a wealthy Dutch businessman living in London, calls the police to say that his wife Kai has disappeared. DCI Clements handles this case as well, and begins to believe that there may be a connection with Leigh's disappearance, although her boss thinks both women just ran away from their lives, and tells Clements not to waste any more time.
The reader is drawn into this mystery of the two missing women- is there a connection?  Both women have secrets they are keeping from the their husbands- is that the connection? The police usually suspect the husband, did either of these men have anything to do with their missing wives either separately or together?
As the story unfolds, there are several red herrings, and the reader will try and put the pieces together even after a big twist in the middle of the story, and a surprise ending that some may find jarring. If you're a fan of the shows on the ID Channel, or a dedicated Dateline watcher, Woman Last Seen is a page-turner of a novel that you will find irresistable. (Note- contains graphic sex scenes and explicit language.)
Thanks to Harlequin Books for putting me on their Winter 2022 Winter Reads  Blog Tour.