Just My Luck by Adele Parks 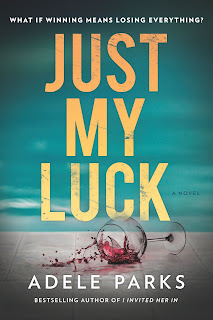 Adele Parks' domestic drama Just My Luck begins with an intriguing premise, one that many of us wish for- what would you do if you won the lottery?
Three families have been friends since the birth of their children fifteen years ago. Each month they get together on a Saturday evening for dinner, and they put money into the pot to play the national lottery. Lexi Greenwood, "the woman everyone knows as the fixer, the smiler- some may even slightly snidely call a do-gooder" collects the money and buys the ticket, playing the same numbers each month.
Lexi and her husband Jake are less-well off than the other two couples, and one Saturday evening the other two couples decide that the lottery is "too common" and decide to stop playing. The following week their numbers were drawn, and Lexi and Jake are the big winners of nearly 18 million pounds, a life-changing amount of money.
Lexi is cautious about their win, wanting to take it slow and figure out how best to handle their new situation. Jake and Emily (their 15 year-old daughter), buy expensive new clothes, a fancy sportscar for Jake, luxury vacations, and a huge new home. Lexi fears this money will turn them into people no one likes.
Right away things become complicated. Three people break into their home while Lexi is home demanding money and threatening her. Family, people they don't know, and charities all over the world send them requests for money. The two couples who stopped playing demand their fair share of the money, claiming that Lexi and Jake are cheating them.
Emily's best friends are the children of the two couples, including her boyfriend Ridley. The lottery win shows the cracks in all their friendships, and even in Jake and Lexi's marriage. Lexi is forced to take a leave of absence from her job at the Citizen's Advice Bureau helping people in need when people mob her place of employment.
Just My Luck has some twists and turns you don't see coming, and Parks does a good job keeping the reader engaged and guessing. As you read it, in the back of your mind, you wonder how you would handle the situation. Would the money change you or reveal the person you truly are? Jake and Lexi are both keeping secrets from each other, secrets that create an crackerjack of an ending. Adele Parks does a fantastic job combining domestic drama with suspense, in a page-turner of a story.
Thanks to Harlequin for putting me on the Winter 2021 Mystery & Thriller Tour.