On A Quiet Street by Seraphina Nova Glass 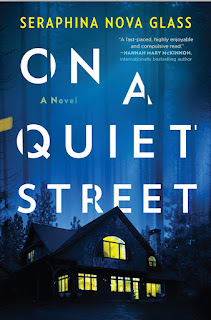 Sometimes you read a book that takes a while to catch your interest, sometimes a book grabs you right away and doesn’t let go. Seraphina Nova Glass’ new novel, On A Quiet Street, took a hold of me on page one and never let up.
The story follows three women who live in a quiet, wealthy enclave called Brighton Hills on the Oregon coast. Paige is mourning the hit and run death of her 22 year-old son Caleb, who was killed near their home. His mother has made it her mission to discover which one of her neighbors killed her son and left him for dead. She is a regular visitor to the police department, and has narrowed her list of suspects. Her husband Grant has moved out, but he still loves his wife dearly.
Cora is married to  Finn, mom to two teens, and spends much of her time doing various charitable works. She doesn’t trust her husband, believing that Finn is once again cheating on her. Finn tells Cora that she is crazy to think he is not loyal to her, and he is tired of the accusations.
Paige offers to use her newfound sleuthing skills to help Cora get the evidence she needs to prove that Finn is a liar and cheat. Fed up, Cora takes Paige up on her offer.
Georgia is married to Lucas, a well-respected judge in the community. She spends all her time caring for their baby Avery, and is rarely seen outside of the home. Cora has tried several times to befriend Georgia, only to be rebuffed. Lucas has told people that Georgia has mental health issues and is agoraphobic, but Cora thinks there is something more.
As the lives of these three women are about to collide, will they find the answers to their problems?  I raced through On A Quiet Street, and couldn’t put this book down. Seraphina Nova Glass ratchets up the suspense in this well-crafted novel, and although as she ties up the loose ends a bit too tidy, overall this is a psychological suspense novel I would recommend. If you were a Desperate Housewives fan back a few years ago, this one is for you.
Thanks to Harlequin for putting me on their Summer Mystery/Thriller Blog Tour.

Posted by (Diane) bookchickdi at 2:47 PM