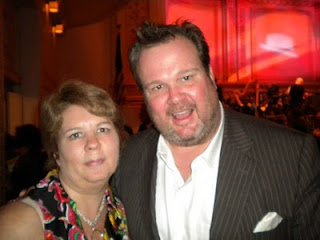 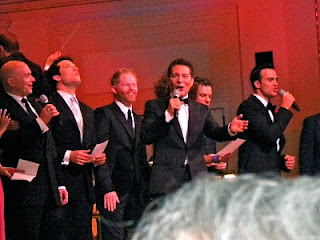 I had the pleasure of attending the New York Pops 27th Birthday Gala, The Best Is Yet To Come: Celebrating The Legacy of Frank Sinatra at Carnegie Hall on May 3rd.

Former Daily News columnist Liz Smith hosted the evening, and after a few comedic attempts to seat herself on a very high chair, she told a few stories about Frank Sinatra.

The opening number was a rousing rendition of New York, New York from the film On The Town that Sinatra starred in. Jesse Tyler Ferguson of TV's Modern Family, Michael Urie of TV's Ugly Betty and John Tartaglia from Broadway's Shrek gave a spirited and exuberant performance. It was a wonderful start to the show.

Handsome Cheyenne Jackson, from Broadway's Finian's Rainbow and TV's 30 Rock walked the center aisle singing Luck Be A Lady. His smooth style and beautiful voice showed why men and women adore him.

Fan favorite Steve Tyrell sang one of my favorites The Way You Look Tonight and then was joined by Hilary Swindal for a duet of Fly Me to the Moon.

Norm Lewis from Broadway's Sondheim on Sondheim and Little Mermaid was smooth as silk in his rendition of Don't Worry 'Bout Me.

Broadway star Michael Cerveris came on stage to sing High Hopes with some special guests, Bad Habit, a group of four young instrumentalists and fourteen members of the Ronald McDonald Choir, all children from Ronald McDonald House. Their music touched the entire audience and resulted in a well deserved standing ovation.

Montego Glover, who received a Tony nomination today for her performance in Memphis belted out a fantastic version of The Best Is Yet to Come. She also looked amazing in a fuschia form-fitting gown.

After Frank Sinatra Jr. performed, looking so much like his father in his later years, he conducted the Pops in Yellow: Laughter, a work commissioned by his father and conducted by him on an album.

Keith Roberts and Tony nominated Karine Plantadit danced to One For My Baby from the Tywla Tharp Broadway show Come Fly Away. I guarantee they sold some tickets to their show that night with their hot dance number.

Michael Feinstein blew everyone away with For Once In My Life, and led the cast in The Theme from New York, New York, featuring middle school students performing with the Pops, and the Young People's Chorus of New York City.

The New York Pops put on a fantastic show, and most people tapped their feet or swayed in their seats. Sinatra's music is the music of America, and it was a joy to hear such incredible performers bring it to life.

I did see a few celebrities in attendance. SNL's Rachel Dratch, looking so beautiful, sat behind me. Behind her was Modern Family's Eric Stonestreet, who plays Cam, to Jesse Tyler Ferguson's Mitchell on the show. He was with Jesse's lovely mother. I was able to speak with both of them, and Jesse's Mom beamed when I told her how much my sons and I love her son's performance on the show. Eric was a really great guy, offering to take a picture with me.
Posted by (Diane) bookchickdi at 2:50 PM