Legacy of a False Promise 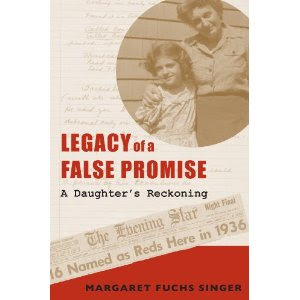 Margaret Fuchs Singer was thirteen years old when her college law professor father was asked to testify before the House UnAmerican Activities Committee regarding Communists working in the federal government. She did not know that both her parents used to be members of the Communist party.

Legacy of a False Promise: A Daughter's Reckoning is her recounting of that period of her life. Sometimes books such as this tend to be not so well written, and a bit dry, but Fuchs writes a powerful, interesting story of her search for the truth about her parents.

Fuchs' parents worked in the federal government in the 1930s and 1940s while members of the Communist party. While they believed in their cause, they still kept their politics hidden from their employers, something that I found intriguing. Singer writes

My father did not see in his Party membership a conflict of loyalties or a threat to the United States, but, instead, a way to participate in the nation's economic and social recovery.(p. 117)

That seems to me like a rationalization. If you believe you are truly doing good, you wouldn't have to hide your beliefs.

The Fuchs attended meetings, recruited other Communist Party members as federal employees, and reported back to a man higher up in the Party. When they became discouraged by events in Russia, they left the party. While they thought they had left it behind, when the government held hearings before Congress in the 1950s, Herbert Fuchs was called as a witness.

The government wanted Fuchs to name other Communists who worked in the federal government, but he did not want to betray his former friends. His employer, American University, promised him that he could keep his job if he cooperated. He was told that his wife would be called to testify if he did not cooperate.

With the memory of the execution of accused Russian spies Ethel and Julius Rosenberg fresh in his mind, Fuchs reluctantly appeared before the Committee and gave them the information they asked for, to protect his wife, his children and his job. He agonized over the decision, but felt he had no choice.

The dean of American University reneged on his promise and forced Fuchs out of his job. Many people felt that Fuchs was a traitor to his country, and others felt that he betrayed his friends by naming names. It was a no-win situation for Fuchs.

Singer vividly brings to life that time period in our history through her family's story. Her description of what it felt like as teenage girl, so confused by what was going on, her relationships with her family, and the fallout from her father's decision are heartfelt.

As an adult, Singer works to find out the truth about her parents, seeking out documents and people who can help her. She is conflicted about this, even fearful about what she may find, but can't come to terms with what happened to her family until the truth is known.

Legacy of a Promise will appeal to many different readers; fans of history and politics, as well as those who like personal stories about family and a search for identity.

Rating 4 of 5 stars
Thanks to Robyn at Carol Fass Publicity & public Relations for providing me with a copy of this book.
Posted by (Diane) bookchickdi at 4:32 PM