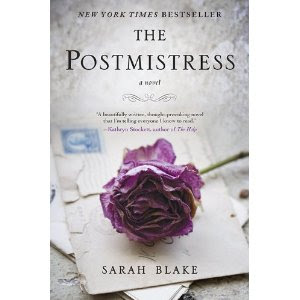 Back in March, I posted that I had the great pleasure to attend a reading and book signing for Sarah Blake's The Postmistress, from Amy Einhorn Books of G.P. Putnam's Sons. It was fascinating to hear the creative process behind the book, a fictional novel about three women's lives that collide during World War II.

Blake described the research that she did for this remarkable novel. She began with Iris James, the postmistress of a small community on Cape Cod. Iris took her job very seriously, believing deeply in the order of government, truth and that mail must be delivered.

Emma was a young bride, in love with her young doctor husband Will, who leaves her behind, pregnant, while he goes off to help the war effort in England after an unfortunate outcome for a patient shakes his belief in himself.

The most intriguing character is Frankie Bard, a young female reporter who travels to England and ends up as a war correspondent working with Edward R. Murrow. When I was a young girl, I wanted be like Brenda Starr, the strong reporter from the comic strip. After reading this novel, I want to be Frankie Bard. (Blake wrote in my book "So glad you're a Frankiephile"!)

Frankie fights to bring the truth of the war to her listeners. The most intense, gripping part of the story takes place when Frankie is on a train traveling through France to Spain. The train is filled with people, many of them Jewish, fleeing the Nazis. The tension on the train is palpable, and Blake writes those scenes with such realism, you can feel your heart beating through your chest as these people are praying to make it to safety.

Frankie hopes to get some people to speak into her new recording device, determined to bring the tapes back to England and allow the people of America to hear the truth in the words of people who fear for their lives. (At this point, the American people are not aware of the atrocities the Nazis are inflicting on Jews and other people.)

The Postmistress feels authentic, thanks to Blake's research at The Radio & Television Museum in Bowie, Maryland. She listened to recordings made by Mary Marvin Breckinridge, Betty Wason, and Martha Gellhorn, female war correspondents, and they inspired the fascinating character of Frankie.

In the end, Frankie and Iris must make a decision that requires them to question whether they can uphold their beliefs about truth and duty. This gripping novel, filled with strong characterizations, asks us to question our own beliefs in the face of adversity as well.

Amy Einhorn, whom I was lucky enough to meet at the signing, has a gift for finding talented writers with a fresh, strong voice. I've read Kathyrn Stockett's The Help, Diana Joseph's I'm Sorry You Feel That Way, and Kelly O'Connor McNees's The Lost Summer of Louisa May Alcott from Amy Einhorn Books, and loved them all. I look forward to any book from this imprint.