Mad For Maisie- Birds of a Feather

As part of the I'm Mad for Maisie Read Along sponsored by the bookclubgirl, I read the second book in the Maisie Dobbs series, Birds of a Feather.  Although it is set in 1930, and World War I had been over for little more than a decade, the effects of the war are still being felt.

Maisie's assistant Billy, who was badly injured during the war, has become addicted to pain killers. His wife comes to Maisie concerned about her husband, and confirming Maisie's own suspicions that something is wrong with Billy.

The main mystery concerns the disappearance of a young woman whose wealthy father owns many grocery stores. Her disappearance comes on the heels of the deaths of three other women, women whom Maisie discovers were friends of the missing woman. 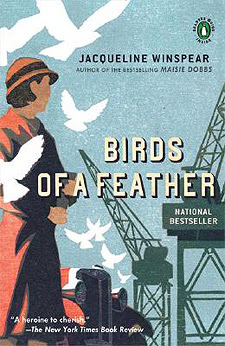 There are many possible suspects, but when the police narrow it down to one of the dead women's husbands, Maisie believes they have the wrong man. She uses the methods taught to her by her mentor Dr. Blanche, both scientific and intuitive, to find the killer. (Again, it could be a forerunner of the popular TV series CSI crossed with The Mentalist.)


My favorite line in the book is one of Dr. Blanche's teachings to Maisie:


"Coincidence is a messenger sent by truth. (That) there are no accidents of fate."

Maisie still visits Simon, the doctor she fell in love with during the war, at the hospital where he will never recover. Her compassion is touching, but in this book it appears that Maisie is ready to move on to having a romantic relationship with another man. She has two possible suitors: Dr. Dene and Inspector Stratton. It will be interesting to see in future books which man may win her heart, and whether either man can stand up to the memory of Simon.

Again, I loved the description of Maisie's clothes. I would love to see illustrations in the book of Maisie's outfits.

I also found the characters in this book more rounded out. Joseph Waite, the wealthy father of the missing girl, is intriguing. He is overbearing with his daughter, but he is kind to his customers and to the families who lost sons and husbands during the war.  Joseph's relationship with his daughter caused Maisie to reflect more on her own relationship with her father, which seems more distant as the years go by.

The Order of the White Feather was something I had never heard of before this book, and it was incorporated well into the story. Young women tend to be dramatic, and the way in which these young ladies thought they were helping the war effort caused more pain than they could have ever imagined. And in the end, it caused them much pain too.

I'd like to see Maisie become more emotionally open, and hope that in future books in the series, we see her find some happiness.  Perhaps in the next novel in the series, Pardonable Lies.  If you enjoy historical fiction and female protagonists, Maisie is the lady for you.

My review of the first book, Maisie Dobbs, is here.

Posted by (Diane) bookchickdi at 3:36 PM