So I saw the new Spiderman Broadway show 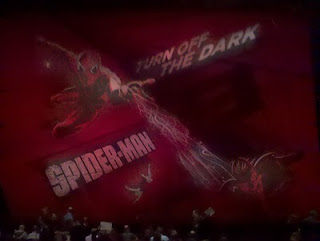 Last night my husband, sons and I saw Spiderman: Turn Off the Dark on Broadway before the guys went back to college. I was really looking forward to it, since I love Broadway and there are few shows that I can get them interested enough in to see with me.

I usually go to Wednesday matinees, where the audience is mostly an older crowd of females. This show had about 65%-35% male-to-female ratio. (If you're looking to pick up guys, this might be a good alternative to the bar scene.)

The good news is that the first act is amazing. I mean jaw-dropping, how-did-they-do-that amazing. When Spiderman flies over the audience and into the balcony, it turns everyone in the audience into fanboys. The first act recreates the Spiderman mythology, which was helpful for me as I was only slightly familiar with Spiderman. (I'm more of a Batman girl.)

We meet the geeky, nerdy Peter Parker, who regularly gets bullied at school. He is love with neighbor girl Mary Jane, whose boyfriend is the head bully at school, which is ironic since her father bullies her. The best song in the show is a duet between Peter and Mary Jane titled "No More", where Peter and Mary Jane mirror their frustration at the abuse they have to take.

Reeve Carney makes a fine Peter Parker, and Jennifer Damiano is wonderful as Mary Jane. I saw her in Next to Normal, which showed off more of her singing and acting talent, but her beautiful, strong voice is a highlight of this show as well. Her second act song, "If the World Should End", is terrific.

The Green Goblin, formerly known as Dr. Norman Osborn and played to perfection by Patrick Page , is a fantastic villain. The scene between Page and Carney on top of the Chrysler Building is a dramatic highlight, and when the Spiderman and Green Goblin aerial performers take over and fly over the audience while engaged in battle, it is stunning. It blows away anything I have ever seen on Broadway. Kudos to Daniel Ezralow who choreographed both the dances (which are excellent) and the aerial performances.

The sets are incredible, starting with the desks in the classroom, to the Chrysler Building to the New York skyline, with bridges, subways and cars to Peter Parker's fire escape. I've never seen anything like it.

The costumes reinforce the comic book aspect of the show, and I particularly liked the scene where criminals overrun New York, and Spiderman vanquishes them. It was very comic book-crossed-with-1960's-TV-Batman, but updated for the 21st century.

At intermission, my eyes were just wide open and all of us were speechless. Then came the second act, which features a new villain, Arachne, a mythological spiderwoman. This is where the show lost me. The character of Arachne is not well formed, and her storyline is confusing. T.V. Carpio plays Arachne, and she has a lovely voice and stage presence. Arachne's Furies, while they have interesting costumes and their dance is clever, their song adds little to the story, it actually slows it down.

Six of Spiderman's vanquished bad guys come back to wreak havoc, and while they are cool to look at, I'm not sure how much they add to the show. The Green Goblin from Act 1 is much more interesting. Director Julie Taymor uses lots of video screens in this act, and the multimedia presentation brings an exciting new element to Broadway, but again, it goes on a bit too long.

There was one short pause in the show, a technical problem that was quickly corrected.  The end of the show comes rather abruptly, without a clear resolution, or a show-stopping song. The songs, by U2's Bono and the Edge are good, but nothing really remarkable. You can recognize familiar U2 chords throughout the show. I do think there are a few songs too many in show, and maybe a few cuts could be made there.

Last night, the producers announced that the opening of the show would be moved from February 7th to March 15th to work on the second act, and that is a good thing. Taymor should take the elements that make Act 1 so strong, and stretch that out into Act 2. After the show ended, I thought if she ended at the end of Act 1, it would have been a much better show. It's almost like two different shows.

Taymor and company have brought a new crowd to Broadway with Spiderman, now let's hope they can tweak the second act, and make it a success. I'm rooting for them.

We got discount tickets to the show, which may not be available for  much longer, given that the show has sold-out many performances. Even with its flaws, I would recommend seeing Spiderman: Turn Off The Dark, if only for the amazing spectacle of entertainment that it is. I thought it was cool when Mary Poppins flew over the audience, but Spiderman takes it to a whole new universe.