Hugh Jackman Back on Broadway 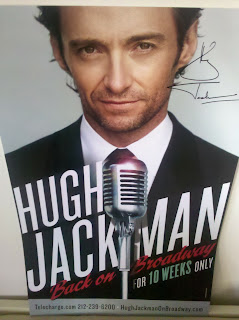 The hottest ticket on Broadway is Hugh Jackman Back on Broadway. I can't say that I'm a huge Jackman fan, but I did like his performances hosting the Tonys and the Oscars. (I regrettably never saw him as Peter Allen in The Boy from Oz.)


I really wanted to see what the big deal was, and when I sat down, the woman next to me was raving about the show; it was her second time. She was going on and on about how wonderful he is and I thought, oh boy.

Then Jackman took the stage, singing "Oh What A Beautiful Mornin'" from Oklahoma, a show in which he played the role of Curley. From the moment he takes the stage in a white shirt and black pants, he owns it. His singing voice is good, not great, but Jackman is an incredible performer.

He calls the show "karaoke where I don't have to share the microphone", and he tells his life story throughout.  A picture of a very skinny 14-year-old Jackman in his rugby uniform drew laughs from the audience, as he tolds how he would rush home from rugby practice to watch old movie musicals on TV.

The best part of the show for me was when Jackman sang and danced to songs from these classic movies with his lovely dancers. "Singing in the Rain", "Easter Parade", "Guys & Dolls"- they were all represented, and Jackman took everyone back to a nostalgic place with a new energy. I loved it!

Everyone loves Jackman. When he pulled a woman up on stage to dance with him because it was her birthday, half the audience gasped, just wishing it were them up on that stage. I really thought some of them might faint, including Grace, the birthday girl.

The show is fast paced, and Jackman's love of musical theater is represented with a powerful "Soliliquy" from Carousel. After intermission, he shows up dressed as Peter Allen in gold lame. This section of the show gets everyone crazy as he remains in flamboyant character to sing Allen's most famous songs and joke with men in the front row. He has such an easy rapport with the audience, joking and teasing in a self-deprecating manner.

He ended this raucous section with a lovely ballad, "Tenterfield Saddler", a song about Allen's father and grandfather that is well-known in Australia, but not here.

Jackman also paid tribute to his homeland with a rendition of "Somewhere Over the Rainbow", with digeridoos and two Aborigine singers. He put an interesting twist on a song that has been frankly overused lately.

He gave a shout-out to his movie career, singing a love song while a video of his most romantic movie roles, including an early career scene with his wife Deborrah.

He tells a beautiful story about how proud his dad was when he found out Hugh was going to perform at Carnegie Hall. His dad flew from Australia to NYC, and Hugh had told him it was black tie. It was actually not black tie, but his dad wore it anyway, because "My son is playing Carnegie Hall. It's black tie for me!" It was very sweet.

At the end of the show, Jackman participated in raising money for Broadway Cares/Equity Fights AIDS. He auctioned off his sweaty t-shirt, and two women got into a bidding war, one of the women being Kathie Lee Gifford. When Kathie Lee gave up at $13,000, Jackman pulled another t-shirt that he wore during Act I, and told them if they each gave him $12,500, they could each have one, and go backstage and get photos with him.

Then he said that if anyone wanted to donate $2500, they could get a photo with him. My husband and sons were very pleased to hear that I had left our checkbook at home, otherwise I may have gotten into BIG trouble.

By the end of the show, I was a convert. I certainly hope that HBO or someone else tapes this fantastic show because the entire world should get to see this amazing man at the peak of his performing career. I rank him up there with great stage entertainers like Bette Midler and even Liza Minelli.

Tickets are impossible to come by, and the show closes in early January, but if you somehow can get a ticket, GO. It's a once-in-a-lifetime theater experience.

Posted by (Diane) bookchickdi at 9:01 AM