Win a Copy of The Heroine's Bookshelf! 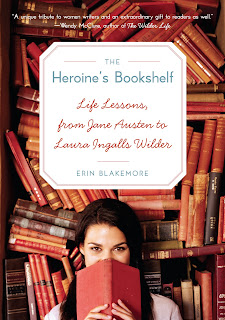 When I was a young girl, I would get lost in books. (OK, so I still get lost in books.) I would identify with the heroine of the story, wondering what it would be like to be her; would I make the same decisions she did?

I fell in love with Laura Ingalls Wilder's Little House on the Prairie series when I was in third grade, devouring each book. I lived in a very cold, snowy climate, and I identified with Laura and her family being trapped in their home in an horrific snowstorm as the snow piled up in my yard.

So it was with great joy that I read Erin Blakemore's Life Lessons, from Jane Austen to Laura Ingalls Wilder. Blakemore writes of the important things she learned from great heroines in literature. Each chapter focuses on a different heroine, and Blakemore discusses not only the heroine herself, but the life of the fabulous female writer who created such memorable characters.

She starts with Lizzy Bennet from Jane Austen's Pride and Prejudice, in which she examines the concept of "Self" through Jane Austen and Lizzy. Lizzy turning down both Darcy and Mr. Collins' proposals mirror Jane's decision to not marry, but Jane never married as Lizzy eventually did, believing that to be true to herself meant not marrying someone she didn't love just to conform to society's norms.

My all-time favorite heroine, Scarlett O'Hara from Margaret Mitchell's Pulitzer Prize winning Gone With The Wind, epitomizes "Fight". I recently re-read the novel along with The Heroine's Bookshelf readalong, and found so many things that both bothered me (the racism) and reinforced my belief that Scarlett is the most fascinating, but seriously flawed, character in literature.

I enjoyed Blakemore's insights into Mitchell's life and her quest to write this book. Struggling to make it as journalist and married to a drunken, violent man, Mitchell had to fight to get her story written and sold. I also liked her analysis of why Melanie will never be as popular as Scarlett, though she is a much better person. I love that Scarlett will fight with everything she has to save herself and those she loves.

At the end of each chapter, Blakemore includes the best time to read (or reread) these books (In Gone With the Wind, one of the reasons is "when the mortgage is due"), as well as "Literary Sisters" to the heroine (Lily Bart from The House of Mirth is one of Scarlett's sisters).

From books that I have read, Harper Lee's To Kill a Mockingbird and Charlotte Bronte's Jane Eyre, to books I'm ashamed to say I haven't read (but will now!), A Tree Grows in Brooklyn and Their Eyes Were Watching God, this is a book that will reconnect you with old friends and encourage you to make new ones.

My favorite line in the book is in the introduction:


"A moment with a book is basic self-care, the kind of skill you pass along to your children as you would a security blanket or a churchgoing habit."

I wholeheartedly agree with that sentiment!

The Heroine's Bookshelf has given me a new perspective on these interesting characters and authors, and reading it I almost felt like I wanted to go to Facebook and 'friend' these authors and their creations. I felt like they were "my friends", and I want to know more about them.

This is a wonderful book to give as a Christmas gift to a woman or teenage girl in your life for whom reading is akin to breathing. I can't recommend it highly enough!

Erin Blakemore and Harper Perennial are generously giving me a copy to giveaway to readers of this blog. Leave a comment in the 'comments section' below, telling me who your favorite literary heroine is. A bonus entry for anyone who becomes a follower of this blog (or already is) and another bonus entry if you tweet this post! The winner will be chosen on December 21 at 5pm.

Posted by (Diane) bookchickdi at 5:17 PM