Come to the Edge by Christina Haag 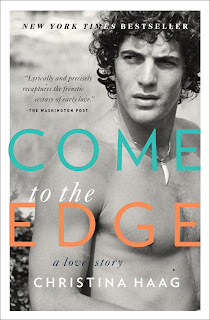 Christina Haag spent five years in a romantic relationship with John F. Kennedy Jr. She recounts these years in her tender and honest memoir, Come to the Edge.  While a memoir about loving one of the most famous Americans could be lurid and gossipy, this book is remarkable in its restraint.

Haag tells a story that is relatable to many women; she loved a man, thought they were headed towards spending the rest of their lives together, but in the end, it didn't work out.

She begins with a childhood filled with games and loving Dark Shadows and Lost in Space. (I loved those too, but wanted to be Judy, not Mrs. Robinson.) Her first remembrance of being aware of JFK Jr. was seeing his photo on the wall at a barber shop. She attended Sacred Heart School with his sister Caroline, but they weren't friends.

As teenagers, their social circles intersected as they attended many of the same parties. He had the reputation as a playboy, even then breaking hearts, and friends warned Christina to stay away from him, which she did.

They both attended Brown University, and shared a house with three other students, one of whom was future journalist Christiane Amanpour. They became closer friends then, and that section of the book sheds much light on Kennedy.

Haag tells of answering the phone one day, and a man on the other end threatened to kill Kennedy. She became justifiably upset, and when the roommates finally found John, he brushed it off. It was something he lived with, but he did not let it rule his life; he lived life to the fullest.

Haag became an actress, and appeared in an off-off Broadway play with Kennedy where they had a romantic kiss that deepened their feelings for each other. He wanted to be an actor, but knew his mother would not accept it, so he went to law school.

The portrayal of Jackie shows a different side to her than most people know. She was genteel yet strong, kind, wise, and she had a bit of wicked sense of humor. She liked Christina, seeing a bit of herself in the young woman whom her son loved. After they broke up, Jackie tried to help Christina get an acting job, and even sent her a note a month before she passed away.

Haag does an admirable job of writing this memoir while still respecting the privacy of people involved. Sometimes when you read memoirs with famous people in them, it can feel like reading The National Inquirer. Not so with Come to the Edge.

Even when she has a right to her anger, such as when he married his wife Carolyn on Cumberland Island, a place that he and Christina discovered together and spent a romantic vacation, she doesn't write of how much of betrayal that was. She describes the lovely time they spent there, and then of hearing that that was where he got married. She makes her point subtly, letting the reader come to her own conclusion how that would feel.

Kennedy comes to life in this book, especially in this passage:


"We had been together more than a year, and there were things I had learned. He was chivalric and competitive, puritan and sensual. He wore Vetiver and Eau Sauvage, and when he didn't, his skin was like warm sun. He loved to cook but burned his food, and he slept with the windows open. I wore his sweaters, he ate off my plate, and we spent most nights at his apartment on Ninety-first Street. And if he was in a mood and I wanted something, a small thing- a light turned on, a fan turned off- I found that if I said the opposite, it worked like a charm... He had a theory that his occasional contrariness was due to being "bossed by so many women" when he was young."

This is more than just a celebrity memoir, this is a story of a great love. Haag writes with grace, honesty and dignity, and anyone who has ever had love only to lose it will relate. Love is difficult, beautiful, exhilarating, breath-taking and heart-breaking, and Come to the Edge describes all its facets perfectly.

If you liked this, you will like Carole Radziwill's book What Remains, about losing her husband, Anthony Radziwill (JFK Jr.'s cousin), JFK Jr. and his wife Carolyn all within a short time.

Posted by (Diane) bookchickdi at 3:40 PM