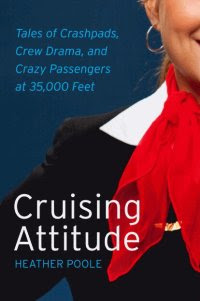 I had just finished Heather Poole's memoir, Cruising Attitude: Tales of Crashpads, Crew Drama, and Crazy Passengers at 35,000 Feet, when the news broke about the Jet Blue pilot who had a breakdown on his flight from New York to Las Vegas. After reading Heather's book, you kind of understood how this happened.

Poole began her career on a regional airline, SunJet, that offered a $69 flight from Dallas to Newark, Ft. Lauerdale and Long Beach. The airline was often filled with unattended minors shuttling back and forth between parents and grandparents, and one flight Poole flew had 12 unattended minors. She joked that the planes were literally held together with duct tape on seats, in the galley, etc.

She eventually moved on to a bigger airline, and she gives the reader a fascinating insight to the world of flight attendants. The first step was flight attendant school, or as Poole called it 'Barbie Boot Camp', which lasted for two months. Each day, fewer and fewer people would be at school; it reminded me of Demi Moore in the movie G.I. Jane, where recruits would disappear without a word.

Poole made a good friend in Georgia, a gorgeous Southern belle who had always dreamed of being an flight attendant. Her roommate was a Texas gal named Linda, who was a grandmother. Heather had her doubts about Linda, but they became friends too.

I learned many interesting facts about flight attendants. For example, they do not get paid until the  plane backs away from the gate. While you're boarding and they are welcoming you and helping with your bags, they are not being paid. I think that is just plain wrong.

They must find crashpads to stay in, usually rented rooms in homes near their base airport. Heather and Georgia lived in a home owned by a Russian cabbie, where they shared a room with four other women, and there were three other bedrooms set up in similar fashion upstairs. And only one bathroom. It sounds almost like living on a submarine to me. (In fact, some people did have a bed-sharing agreement, like a submarine.)

There were even some flight attendants who lived in RVs in the employee parking lots at JFK airport.

Poole attempts to explain the reserve system, which sounded like the equivalent of hospital residents on-call system, but I didn't quite understand all of the intricacies of it. It is very involved, and the first time Heather was called to work on reserve, she messed it up and almost got fired, as she was on probation and could be fired for any small infraction.

In the 1970s, flight attendants averaged 18 months of employment, because they must be single and childless. Today, they last either a few months or an entire lifetime; there seems to be no middle ground.

Most attendants take the job for the travel passes; the ability to fly for free or for a very reduced rate. They can also have a few family members or friends fly for free. For the low pay and sometime abusive conditions, I'm not sure it's worth it. (Some of her stories of horrible passengers made me cringe. How can human beings act like that?)

Poole is a terrific writer; her book reads like a good novel. She tells her story with humor and pathos, and there's even some tension thrown in for good measure. I raced through the book, and it gave me a new appreciation for flight attendants.

One thing she said that stuck with me is that flight attendants appreciate hearing a "please" or "thank you".  I think that it is only fitting that I end by saying 'thank you' to Heather Poole for writing this informative and entertaining memoir.