I tried two new recipes this week. The first one was from ABC's The Chew, where I have had tried a few recipes, some were good, some not so much. This one, Clinton Kelly's Pan Fried Chicken with Brown Butter Caper Sauce, is similar to a Chicken Piccata, but the blood orange sauce added a fresh twist.

Kelly made it for a show about favorite restaurant dishes you can make at home, and he called this Chicken Glenobloise, which I have never heard of before.

It was very easy, took less than 30 minutes, and I had all of the ingredients (except for the blood oranges) on hand. And you could use any citrus fruit, (lemons, oranges) that you have on hand.

It looks very pretty plated, with blood orange sections on top, and I served it with homemade potato salad and a fruit salad to tie in with the entree.


The link to the recipe is here on The Chew's website : Clinton Kelly's Pan Fried Chicken with Brown Butter Caper Sauce. One thing I don't like about The Chew is their website. They need a redesign; sometimes they leave ingredients off the list that are called for in the directions, or the directions don't make sense. I think they need a better editor on that site. Sometimes it's like whomever is putting up the recipes doesn't read them after they are typed in.

I also made a recipe from Robin Miller's Robin Takes 5 cookbook, which features recipes with 5 ingredients under 500 calories that can be made in under 30 minutes. I  made her
Cranberry Barbequed Pork Tenderloin
1 1/4 lb. pork tenderloin
15 oz. can whole berry cranberry sauce
2 tsp. dijon mustard
1 tsp. liquid smoke (I used Worchestershire sauce)
1/4 cup chopped scallions 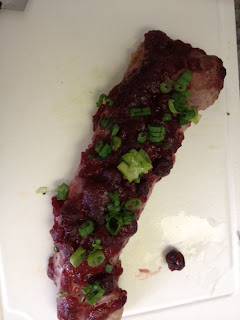 Both dinners were tasty, and the pork tenderloin is one my sons would be able to make at college. I liked the combination of sweet and sour with the cranberry and dijon mustard. They were easy to make, and are perfect to put on the table on any weeknight.