All Our Worldly Goods by Irene Nemirovsky 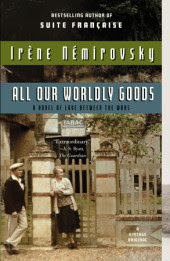 Nemirovsky's Suite Francaise, a moving, thought-provoking novel about France in World War II, was even more poignant knowing that the author died in a concentration camp before it could be published. This novel, All Our Worldly Goods, set in France between the world wars and focusing mostly on one family, was written before Suite Francaise. Young Pierre Hardelot, whose family owns the town's paper mill, falls in love with Agnes and breaks his engagement to another, more suitable woman (according to his family) to marry her. Pierre goes off to fight to WWI, and his family fears for his safety. When the fighting approaches their town, Agnes and Pierre's family must flee to safety together.

Like Suite Francaise, the scenes of the French leaving their homes are vividly drawn and harrowing. The author places the reader in the middle of the chaos, and you can feel yourself holding your breath as you read them, hoping they get to safety. You also feel the claustrophobic atmosphere as the family is forced to live together in cramped quarters during the war. As the mother of two sons, I found the passage where Pierre's mother sent her son off to war so beautifully written.

Nemirovsky is also a master of character development; I was very invested in Pierre and Agnes and their family's story. Their love story is the glue that holds the novel together, and as they age and have to send their son off to WWII, they reflect on their own experiences two decades before at the dawn of WWI.

War isn't the only conflict in the story. Pierre's grandfather, who owns the factory, cuts Pierre out of his life because Pierre defied his family's choice of a spouse. The jilted woman comes back looking for revenge, and she is a sad, angry woman. These two characters try to wreak as much havoc as the war on Pierre and Agnes.

Using the world wars as backdrop, Nemirovsky writes a masterful story of love, family and loyalty. The reader is drawn into this small town in France at a time when the world was a dangerous place. Reading this book is an emotional experience.