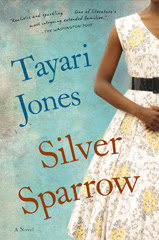 When a novel starts with the sentence, "My father, James Witherspoon, is a bigamist", you know it's going to be an intriguing book. Tayari Jones' luminous novel has two narrators, Dana Lynn Yarboro, who knows that she has a sister and that her father has two wives, and Chaurisse Witherspoon, who does not know about her sister or her father's other wife.

Dana tells us how her daddy was buying his first wife Laverne an anniversary gift, and he fell in love with the woman at the gift wrap counter of the department store, her mama Gwen. Gwen knew right away that James was married, yet she still dated him, fell in love and had his baby. She also insisted that they get married in the next state over, and James agreed.

When Dana was five, she drew a picture of her family in school, including her daddy's two wives and two girls. Her daddy told her then that she couldn't tell anyone about him or his other wife or daughter. When Dana asked if they were a secret, he told her "no, you've got it the wrong way around. Dana, you are the one who is secret."

That moment changed her life. Dana and her mother would go 'surveilling', following Laverne and Chaurisse around, spying on them. Every Wednesday, James would come to Dana's house for dinner, sometimes accompanied by his best friend Raleigh, who also knew the secret.

Gwen fought for her daughter, shaming James into paying for science classes, any extra she could get to make up for the fact that Dana did not have a daddy she could acknowledge publicly. Gwen worked long, hard hours as a nurse, resenting that Laverne, the other wife, got to work out of her own home in a beauty parlor she owned.

Dana resented Laverne and Chaurisse, especially when Chaurisse got things Dana wanted. She got a job at the local amusement park, but couldn't take it because Chaurisse got a job there too. When her daddy presented her with a beautiful rabbit fur jacket, she felt special, until she saw Chaurisse wearing the same jacket.

The second half of the book is narrated by Chaurisse, and I thought it was the stronger half of the book.  Chaurisse is a sympathetic character. She is lonely, not pretty or smart like Dana. She didn't have any friends, and neither did her mother.

I found this intriguing; none of the women in this book had friends, they were all lonely. You might say that because Dana and Gwen were a secret, they probably wouldn't have many friends, but why didn't Laverne or Chaurisse have friends? Laverne was exposed to many women at her home beauty salon, but she seemed to have no friends. I wonder if this is a commentary on these women or on all women?

I didn't really have a handle on James as a character, he seemed to be an OK guy, but he always appeared a bit out of focus for me. Raleigh, on the other hand, was a fascinating character. James' mother took him in as a child, and he grew up like James' brother.

Raleigh had so many good qualities, but somehow he got swept into James' deceptive life. He always seemed to be the one who tried to make things right, to smooth things over for everyone. But he was lonely too, never having a family or love of his own because he had to keep the peace for James and his two families.

The author said that all stories are about secrets, and that what happens when the secret is revealed is the interesting part. Eventually, James' secret comes out, and the sadness and heartbreak that follows makes for gripping reading.

The writing in Silver Sparrow is just beautiful, and this story has a lot to say about the relationship between mothers and daughters and between sisters. One line really resonated with me. Chaurisse was a bit envious of the easy conversation between her mother and Dana, saying "it was like my mother was a newspaper that everyone could read except for me." I think it's true that we don't see our mothers in the same way others do.

This luminous story grabbed me right at the beginning, and I found myself caring so deeply about these characters, it was like they were people I actually knew. I rooted for them all to be OK, even though the situation dictated that it may not end that way. Tayari Jones has written a lovely novel, one that begs to read again and again.

Tayari Jones and Judy Blume appeared at the Algonquin Book Club at Barnes & Noble 86th St. in NYC. My blog post on that is here.

Posted by (Diane) bookchickdi at 3:24 PM