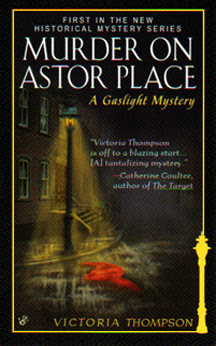 I am a big fan of Jacqueline Winspear's Maisie Dobbs series, about a female private investigator/psychologist in post WWI London, having read all of the books.  Chelsea Clinton is also a fan, posting on Facebook about her memories of reading the books with her grandmother. Chelsea asked if anyone had recommendations for books like Maisie, and someone posted about Victoria Thompson's Gaslight Mystery series, about Sarah Brandt, a midwife living in New York City around the turn of the 20th century.

I kept that in mind, and when I was waiting for a book signing at Barnes & Noble 86th St. store in NYC recently, I found myself in the Mystery section, and remembered the books. I found the first one, Murder on Astor Place, and picked it to read while waiting.

Once I started it, I knew I had found a companion for Maisie across the pond. Sarah was a widow who lost her husband, a doctor, to a violent crime. She served her community as a midwife, and one night while helping a boardinghouse owner deliver her baby, she sees a teenage girl who looks very much like a woman she knew as a teen. The girl looks frightened, but Sarah had other duties at hand.

The next day she discovers that the scared teen had died, and Sarah met Sergeant Frank Malloy of the NYPD, who was investigating the case. Sarah gives Malloy some help with the case, and they discover that the girl was pregnant when she died.

Sarah becomes curious, and finds out that the girl, Mina, was the younger sister of the woman she knew. She entangles herself in the police case, at first to the consternation, then at the request of Sgt. Malloy. Sarah came from a prominent New York society family, although she has been estranged from her family since her younger sister died tragically.

She uses her connections to insinuate herself in the middle of the case. Mina's family does not want to help the police find their daughter's killer, which only makes Malloy and Sarah more suspicious.

The mystery of who killed Mina is a puzzler, and there a few red herrings to throw the reader off the track. This is a fine mystery series, and I especially liked the setting of NYC at the turn of the century. You get a real sense of time and place in this book, and others in the series include Murder on Lenox Hill and Murder in Gramercy Park, so I imagine that working your way through the series would be a real snapshot of New York at that time.

If you are a history buff, you would enjoy learning about Teddy Roosevelt and the NYPD reforms he put in place, and the medical aspects and the society angle of the book fascinated me as well. And for those going through Downton Abbey withdrawal, there is a bit in here about "the merits of marrying off wealthy American girls to poverty-stricken English noblemen just to have a titled lady in the family- a practice that had become so widespread it had a name: Anglomania."

The author has a sturdy, honorable heroine in Sarah Brandt, and her budding relationship with Sgt. Malloy is one I look forward to discovering in future books.  If you are a Maisie Dobbs fan looking for a new series, give Victoria Thompson's Gaslight Mysteries a try.

Posted by (Diane) bookchickdi at 3:19 PM