I've been to many book talks and signings, but a recent one by Jean Zimmerman for her debut novel, The Orphanmaster, added a unique dimension that enhanced the evening- she had a slide show featuring some of the things that inspired her historical novel.


Zimmerman has written non-fiction books, including Love Fiercely: A Gilded Age Romance and The Women of the House: How a Colonial She-Merchant Build a Mansion, A Fortune and a Dynasty, so research has been a big part of writing life. It was fascinating to see some of her own research up on the screen and her enthusiasm was contagious to those of us in the audience.

She describes her novel as a "thriller horror romance, a love story wrapped around a mystery set in a small town of New Amsterdam in Lower Manhattan in 1663." The Orphanmaster follows Blandine van Couverling, a young female trying to make it as a trader and Edward Drummond, a British spy who fall in love while trying to discover who is killing young orphans in New Amsterdam.

Zimmerman showed us some maps from 1660 of Lower Manhattan that look eerily familiar to today's maps.
We could even pick out Broadway and Wall Street!

We also saw slides of some of the paintings of people who inspired Blandine's look, and objects that she may have traded, and it was utterly fascinating. Margaret Hardenbrook was the richest woman in New York, and she was one of the real women on whom Zimmeman based Blandine.

Zimmerman though that this photo of a female and male trader bartering was a good representation of how Blandine and Edward may have dressed. 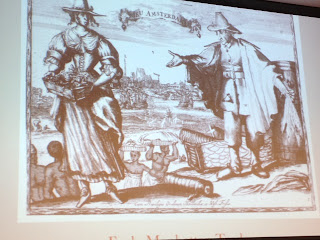 I always enjoyed history class and Zimmerman gave us a quick lesson in her short talk about the Dutch who settled the colony. Women were educated in Holland and allowed to be merchants, so it was not unusual to see that the women who moved to New Amsterdam were intelligent and able to support themselves and their families as merchants and traders.

She also told us that eighteen languages were spoken in New Amsterdam,  about which I had no idea; I guess it's not to different from the Manhattan of today in that respect.  We saw lots of representations of beavers, the main source of fur and a huge basis of the economy.  (Beaver hats were the hot trend then.) The fur trade was centered in Albany, which was a more dangerous place than New Amsterdam.

Zimmerman liked writing this novel, "creating a real world grounded in details" that are historically accurate. I'm looking forward to reading The Orphanmaster, a historical novel written by someone who loves history and the role of women in society at this time. I'll post a review soon.

Zimmerman is also participating in Bryant Park's Word for Word Author Series on August 1st at 12:30pm in their Reading Room along with other debut novelists including Cristina Alger (The Darlings) Karen Walker Thompson (The Age of Miracles) and Karl Taro Greenfield (Triburbia), and I can't wait to hear more about this intriguing novel.

You can read more about Jean Zimmerman and The Orphanmaster on her blog.