Weekend Cooking- The Body in the Boudoir 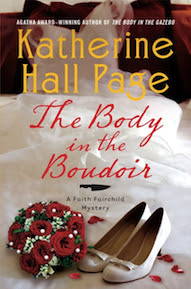 Katherine Hall Page writes the Faith Fairchild series, combining mystery with food.  Her 20th book and the first one I have read is The Body in the Boudoir, which begins with Faith and her husband, Reverend Tom, on a plane heading to Italy to visit a friend.

We flashback to Faith and Tom's first meeting, as Faith's company, Have Faith, is catering a wedding, where she meets the handsome and charming Tom. They flirt, they dance, she finds out he is the officiant at the wedding. Faith and her sister Hope have grown up in a religious family, as their father is a pastor at a large church in Manhattan, and Faith is not interested in becoming a pastor's wife.

But life is funny that way, and Faith and Tom fall quickly in love. Tom proposes on the back of a beautiful vintage watch, and soon Faith is planning a wedding. She wishes to marry at her Uncle Sky's gorgeous mansion on Long Island, and when things start to go wrong- she is almost hit by falling debris, someone tries to push her onto the subway tracks, the titular body found in the boudoir- Faith does not change her wedding plans.

Faith is an amateur sleuth and she becomes enmeshed in one of her new employee's quest to find an American soldier who spent time in Italy with the employee's family during WWII. Is this the reason that these accidents have befallen Faith?

The murder takes place almost halfway through the book, and when the killer is finally revealed, I found it slightly implausible.  If Faith is supposed to have such good instincts, how did this person fly under the radar for so long? It was an issue for me.

Faith also helped her sister try to find out who was sabotaging her at her finance job, but this was a secondary mystery, although the outcome was more realistic in my view.

I liked two things in particular about this novel: the New York setting and the catering. I live in New York, on the Upper East Side, and I really enjoyed how Page integrated the setting within the story.

I also have a background in restaurants, so I found the catering parts of the book very interesting. Page gives some recipes from the story in the back of the book, and there are some I want to try, including this Veggie Mac & Cheese, which can be found on her website.


Shred the cheese and set aside. Reserve 1/4 cup to sprinkle on top.
Dice the peppers, mince the peeled garlic cloves, and place in a saucepan with the 1/2 cup of water. Bring to a boil and lower to simmer until the vegetables are very soft, about 15 minutes.
Boil water for the pasta.
Steam the cauliflower and when it is soft, transfer it to a bowl and mash roughly—you want some texture.
Cook the pasta according to the directions on the package and in the meantime place the contents of the saucepan, the butter and milk in a food processor or blender. Pulse until smooth. Add the mixture to the cauliflower along with the shredded cheese, paprika, and salt. Drain the pasta and fold it into the sauce. Stir well so all the pasta is coated. Pour it into a casserole and top with the reserved cheese. Bake in a preheated 350 ° oven until nicely browned and bubbling. The red peppers give the sauce a bright color and the smoked paprika, widely used in Mediterranean cooking, adds a subtle flavor as well as more color.
Serves six.
You may also serve this sauce over pasta without baking.

Note: You can make a tasty, easy soup with any leftover florets, if the head is a large one, and the stems. Simply chop roughly and put in a saucepan. Add a small sliced yellow onion and cover with chicken broth, your own or store bought. Bring to a boil and simmer until the vegetables are soft. Puree in a blender or food processor until smooth. Return to the saucepan, add 1 cup half and half or milk and 3/4 cup grated white cheddar cheese. Add a pinch of salt if your broth was no-salt. Simmer, stirring occasionally until the cheese is melted and serve or freeze. A curry spice blend is also nice in this. (Faith, and I, hate to waste food. You can use this recipe for broccoli stems and other vegetables as well. )
I would like to read another of the Faith Fairchild mysteries to see if I like the resolution of the mystery any better. If you have read any of them, do you have a recommendation? Let me know in the comment section below.

Posted by (Diane) bookchickdi at 5:27 PM