New in Paperback- The World Without You by Joshua Henkin 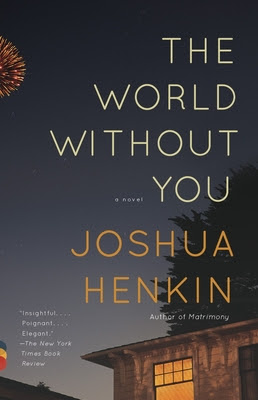 Some books are all about plot, some are more character studies. Joshua Henkin's novel, The World Without You falls in the latter category.

The Frankel family, father David and mother Marilyn, are preparing for the arrival of their three daughters,  Lily, Clarissa and Noelle, along with their spouses and children, and their daughter-in-law Thisbe with her young son for a memorial service for their son Leo, a journalist murdered last year covering the Iraq War.

The story revolves around how Leo's death has affected the family. Marilyn, a doctor, turned outward; she consistently wrote op-ed pieces for newspapers against the war and worked on John Kerry's presidential campaign. David turned inward, taking up running to deal with his loss.

Marilyn decides that it is too painful to stay married to David and asks him for a divorce; he is devastated by the request. Marilyn intends to tell the family while they are visiting for the memorial, and they are completely blindsided by this announcement.

Henkin makes this characters so real that reading this novel felt like I was eavesdropping on this family during a particularly tough time. They are complicated people, who make mistakes and love and fight and misunderstand and are misunderstood; you know, just like your own family.

"Noelle is her sister, but the fact is they can't stand each other, and when Lily feels uncomfortable she goes for high drama; histrionics is her point at rest."

After a wild, promiscuous adolescence, Noelle moved to Israel, married and became an Orthodox Jew, closely following all rules. She felt that "she was peeling layers of herself, molting an identity she had wanted to molt for years and hadn't realized she was capable of molting."

Clarissa "didn't say a word until she turned three, at which point she began to speak in full sentences. She suspects the story is exaggerated, but it gets at an essential truth about her." Lily "throws herself into things, whereas (Clarissa's) a watcher, she's cautious, she's a student first and she doesn't like to make mistakes."

Henkin's describes his characters as they see themselves and as they are seen by the people who know them best- their siblings. Anyone with siblings will get that right away.

Thisbe describes what it's like to be a widow:

"Everyone, she thinks, wants to know about the milestones- Leo's birthday, their anniversary- those are hard, of course, but it's the everyday things that are the toughest. When she used to shop for groceries, she would get this cereal Leo liked, Great Grains Raisins, Dates and Pecans, and she mustn't have been thinking because a couple of months she ended up with a box in her shopping cart."

Describing what's it's like to become part of the Frankels, Thisbe says:

"That's one of the things that appealed to me about Leo- the tumult of you Frankels, as if in your presence I am being swallowed by a many-tentacled beast and made into a tentacle myself. Clarissa, Lily and Noelle- you were older by the time I came along, but I still felt that in marrying Leo I was getting you as sisters and when he died, I lost you too. I know that losing a husband is different from losing a sibling, and it's especially different from losing a son."

That paragraph states the theme of this beautiful, insightful novel- loss is different for everyone, and in The World Without You, we see how parents, siblings and spouses deal with that loss and the life that goes on.

Posted by (Diane) bookchickdi at 6:31 PM