The Light in the Ruins by Chris Bohjalian 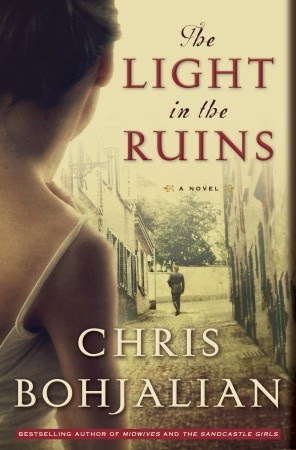 I've read some WWII books set in Germany (City of Women, The Life of Objects), France (Suite Francaise)  and England (The Guernsey Potato Peel & Literary Society and Phillip Rock's Abingdon Pryory trilogy), but I hadn't read many set in Italy.

Chris Bohjalian returns to historical fiction again after his last novel, The Sandcastle Girls, was set after WWI in Armenia during the genocide there. This time in The Light in the Ruins, we meet the Rosatis, Italian descendants of nobilty. They have a lovely large mansion near Florence and life is good until Italy decides to throw its fortunes in with Hitler's Germany.

What I find interesting about many of these books is the theme of what happens to people who want nothing to do with war, who do not support their government. They cannot openly defy their government, and they can hide from the war for only so long before it comes to their doorstep.

The story takes place both during WWII and ten years later when someone begins to murder the surviving members of the Rosati family. Daughter-in-law Francesca, who lost her husband and children to the war, is brutally butchered. It is thought that she picked up a strange man who killed her, until another Rosati is murdered.

We meet a female Italian homicide detective, Serafina Bettini, which is a unique job for a woman in Italy in the 1950s. Serafina has a fascinating past, and as the story unfolds, we discover her connection to the Rosatis. I loved this character and would enjoy seeing Serafina in another book (hint hint Mr. Bohjalian). Bohjalian has a knack for writing interesting, complicated female characters (Midwives, The Double Bind,  The Sandcastle Girls).

The book moves back and forth in time, and we see how the Rosatis are drawn further into the war. One son, Francesca's husband, is an engineer who ends up on the front lines. Another son is an art historian, and his job is protecting art from falling into the hands of the Nazis. This part of the story intrigued me, and I learned much about a topic I had not known about before.

The youngest Rosati, Cristina, falls in love with a young German soldier, and this complicates matters. Her family is upset, and the townspeople, some of whom are resistance fighters, distrust the Rosatis. They feel that the Rosatis have thrown their lot in with the Nazis and deserve whatever misfortune comes their way.

War is hell, and their is plenty of horrific atrocities that take place in the book. Even though as a reader you brace yourself for it, the things that happen are shocking and brutal. The Rosatis have to deal with the Germans, and then the Russians as they come through looking for the Germans. The horrors of war come right into their home and the result is devastating.

There is so much in this book to recommend. The history, the characters, the setting (it has increased my desire to visit Italy), the mysteries (who is killing the Rosatis and why, and what happened to Serafina during the war), they all come together in the skilled hands of Chris Bohjalian.

I lost myself in The Light in the Ruins and isn't that really why we read books? This is one of the best books I have read this year.

Posted by (Diane) bookchickdi at 4:36 PM