Barnes & Noble on East 86th St. hosted two Broadway-themed events in the past two weeks that were fun and informative.

The cast of Pippin were there on July 9th to sign copies of their cast recording. They opened with a video of the first song on the CD, Magic To Do. It was a unique way to begin and got everyone in the mood.

Then Rachel Bay Jones (Catherine) took the stage and sang Kind of Woman. I swear, she reminds  me so much of Jane Krakowski, with her killer voice, blonde hair and big smile. She’s got a great future ahead of her.

Matthew James Thomas (Pippin) joined Jones for a duet of Love Song, which was so sweet; their voices melded together beautifully.

The last performance was from Tony winner for Pippin, the amazing Patina Miller (Leading Player), singing Simple Joys. I’ve seen her in Sister Act and at Lincoln Center for a one-night concert performance of Ragtime, and she is one of the most talented people on Broadway today.

The cast, including Tony winner Andrea Martin (Berthe), whom I have loved since her days as Edith Prickly on SCTV, and who has the most incredible scene singing a song while on a trapeze- upside down, Terrence Mann (King Charles), Charlotte d’ Ambroise (Fastrada) and composer/creator Stephen Schwartz all signed CDs following the performance.

If you haven’t seen Pippin yet, make sure to put it on your to-do list. It is spectacular!

The second CD performance and signing was Carolee Carmello singing songs from Scandalous, which closed on Broadway after a brief run last winter.  Book and lyric writer Kathie Lee Gifford and music writer David Friedman were also there, and they talked about the inspiration for the show, and how it came to be.

Normally you just get a few songs and a signing, but this was so much more interesting. Gifford has been trying for thirteen years to bring the remarkable story of Amy Semple McPherson, a superstar evangelist from the 1920s, who was as famous as Madonna in her day.

We heard about the various iterations of the show in DC and Seattle, and the tough decisions they had to make on what to cut (Gifford said that there were 15 more songs that didn’t make it in the show, including a gospel song that was her favorite).

It was an eye-opening look at how difficult it is to get a show to Broadway, and the heartbreak at seeing it close. I saw the show and liked it, though I could see how difficult it was to tell such a rich story in such a short time.

The Tony-nominated Carmello brought down the house (and brought Gifford to tears) as she belted out three songs from the show, Stand Up, Why Can’t I? and How Could You? (Gifford likes songs that ask a question. See also- Lost or Found? and What Does It Profit?) 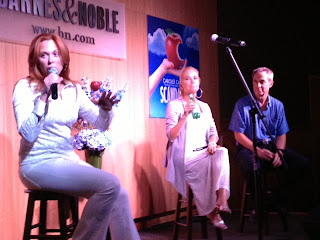 I literally had goosebumps listening to her sing and recorded two of the songs, which you can see below. Carmello is such a talent, I hope to see her back on Broadway soon.

Posted by (Diane) bookchickdi at 4:43 PM