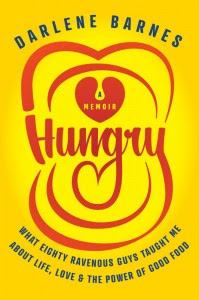 What drew me to Darlene Barnes' memoir Hungry: What Eighty Ravenous Guys Taught Me About Life, Love and The Power of Good Food was that we had some things in common: she had two sons and was getting ready for 'empty nest syndrome' as she sent her last son off to college, and she liked to cook.

Barnes married a man in the Canadian military, so they moved from base to base. He eventually ended up as an engineer and they lived in Texas. She found a job working as a personal chef for a very wealthy (and a wee bit crazy and self-involved) family. What she liked best about the job was getting to taste the lunches that the Korean maids brought in- Korean vegetable pancakes and chili pastes- and the  fresh corn tortilla tacos the gardeners ate. Her wealthy clients insisted on Kraft cheese singles and fat-free yogurts, not exactly healthy or tasty.

When her husband took a job with Microsoft in Seattle, Barnes applied for a job as a cook at a fraternity house at the University of Washington. Her prickly personality and penchant for cursing earned her a reputation as someone not to be messed with, a definite plus with the frat members and the vendors, who were not accustomed to a frat cook who questioned what they were selling.

Barnes thought the job as a cook for a fraternity to be a "puzzling occupation, like circus clown or spy." But she was told she would have the ability to create her own menus, within the budget restraints given, and to make the job whatever she thought it should be.

She knew how to deal with young men, as she had two of her own, but there were moments that gave her pause. Stepping over broken glass on the way to basement storage and having to install a childproof device on the freezer after finding it unplugged three times made her apoplectic. But the respect and kindness the young men showed her convinced her she had done the right thing in taking the job.

Barnes was appalled at the kind of food that the men were used to; they had grown up on Pop-Tarts and Kraft mac and cheese. Still, they were willing to give her food a try. Instead of the frozen meatballs and fajitas the last cook served, Barnes made hers fresh. Her goal was to get them to eat healthier, to try new things, like kiwi fruit.

She decided that it was easy to make salad dressing from scratch, so she stopped buying bottled. This simple decision led her to question what else she could make from scratch, like soups, salsa and sauces. From there, she began a quest to use as much locally produced foods as possible. From fruits and vegetables to beef and chicken, Barnes questioned her vendors and sought out the best food she could buy for the guys.

The food service company sales reps were not as receptive as the frat guys. They often found Barnes to be argumentative and a general pain compared to the other fraternity and sorority cooks who just served packaged or frozen foods, but some grew to respect her way of thinking.

Barnes takes us inside the fraternity and introduces us to some of the guys. She talks about the ones she likes, and the few she felt were lazy. She watched as they pulled together during a few tragedies and answered their frequent text messages with cooking questions, even as she was on vacation in Istanbul with her husband. Her relationship with the guys is touching and sweet, even though she plans to quit every single summer.

I enjoyed Hungry immensely; Barnes' cranky, honest personality shines through. Her decision to make frat food tastier and healthier inspired me to be more mindful of what I'm buying and preparing for my family. I felt like I was right there in the frat kitchen with her, and if the Food Network is smart, they will snap her up and give her a show. I'd watch in a heartbeat.

I also like that there are many recipes throughout the book, and I'm going to try most of them, starting with Blueberry Cornbread now that blueberries are in season. (See, I learned something already!)

Place butter in a 10-inch cast iron skillet and place in a 375 degree oven until butter is melted. Stir together cornmeal, flour, baking powder, salt and sugar. In a separate bowl, beat eggs and stir in milk. Add liquid ingredients to dry ingredients, stir in blueberries, and pour mixture into the hot skillet. Bake 30 minutes and serve with butter and honey.

Thanks to TLC Tours for putting me on this tour. The rest of the tour stops are below.