The Lady's Maid by Dilly Court 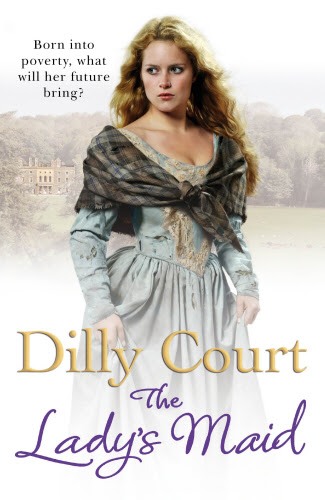 Though I am not a big reader of British historical romance novels, there was something about Dilly Court's The Lady's Maid that grabbed my attention. Maybe it was that awesome author's name- Dilly Court; I mean, how can you resist that? Maybe it was the cover, which reminded me of all those paperback books you would see in the racks near the back of the pharmacy at your local drugstore.

Whatever it was, I am so glad I read it. I was captivated from the very beginning, with two young woman, one a gyspy girl and one a lost lady ready to give birth to their babies in the woods, alone except for gypsy girl's mother.

The gypsy girl was pregnant by the son of the lord of the manor where she worked; he didn't know or care and she was betrothed to another man who wouldn't marry her if he knew the truth. The lady's fiancee was a soldier, off to war where he would die in battle. Her family wanted to hide her pregnancy for reasons of propriety.

The lady did not live after childbirth, and asked the gypsy woman to care for her baby and name her Katherine. The gypsy woman knew of a farmer whose wife had had several stillborn births and had just lost another. She delivered the baby to the farmer, telling him the baby's name and convincing him to tell his wife her own baby had lived this time.

The gypsy girl's baby was delivered to the wealthy landowner's lady-in-waiting, who conspired with her lady to pass the baby, a girl called Josephine, off as her husband's heir, as she could not have children. Just as you would expect, all the chickens will come home to roost as secrets can't stay hidden forever.

Kate worked as a maid in the castle where Josie was raised as royalty. They became best friends and although Josie could be spoiled, impulsive and temperamental, she did love Kate. Josie had a little bit of Scarlett O'Hara in her (she even shatters a glass against a wall as Scarlett did in a famous scene), and maybe that is why I liked her. It even takes place in the 1860's, as Gone With The Wind did.

Kate lived with her father after her mother died, and Sam and Molly, two orphans who ended up on their doorstep and were taken in by her father. Sam, Kate and Josie grew up together, and as they grew older, Sam had feelings for Josie that she wanted to return, but knew that love between could never be.

Josie had her eye on Harry, a handsome, wealthy merchant whom her father wanted her to marry. Once Harry met Kate however, he fell hard for her. Kate tried to hide her growing attraction to Harry, but Josie could see and became livid.

The romantic entanglements with Josie, Harry, Kate, Sam added some more elements as a local reverend who took Kate and Josie in after a carriage accident and widower who wanted Kate to marry him and become a mother to his two bratty daughters become involved.

The Lady's Maid delighted me, and Court takes a story that we are familiar with and adds her fresh spin on it. The many characters are well-drawn and interesting, from Kate and Josie down to the minor characters of Josie's elderly former nanny, and Boy, a young disabled cook whom Kate befriends.

This is a book to get lost in, transported back to old England where you hope that in the end, true love and friendship prevail, and everyone gets what they truly deserve, good and bad.

Thanks to TLC Book Tours for including me on this tour. The rest of Dilly Court's tour is here.