The Returned by Jason Mott 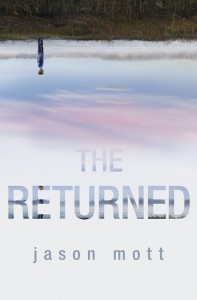 Every year at the Book Expo of America there is one book there is everywhere and people are buzzing about it. This year, it was Jason Mott's The Returned, which had already been optioned as a TV series by ABC well before the book was even published. (See more info here on the TV show, now called Resurrection.)

The premise is intriguing- what happens when dead people start turning up alive, looking exactly as they did at their death? Agent Martin Bellamy of the International Bureau of the Returned shows up on the doorstep of Lucille and Harold Hargraves, an elderly couple who lost their son Jacob fifty years ago on his eighth birthday when he drowned in a local river.

With him is a young boy who looks exactly like Jacob. He was found wandering in China and Agent Bellamy was bringing him home. Lucille, who thought that these 'Returned' were the work of the devil, changed her mind the minute she saw her beloved son in front of her. She was willing to believe it was Jacob because she missed him so much.

Harold was more skeptical; he didn't know what to make of this boy in front of him, but he didn't believe it was his son. Agent Bellamy asked them if they wanted to keep Jacob, and Lucille prevailed.

More and more Returned kept turning up, and people became frightened and angry. Protests erupted all over the world, some people believing it was some kind of government conspiracy (what kind of conspiracy, they could not say).

As the number of Returned began to swell out of control, the President of the United States ordered them confined to their homes, but soon they begin to confine them in government buildings in specific cities. Harold and Jacob were out one day, and they were caught by the police and confined to the neighborhood school, which now housed hundreds of Returned.

Harold refused to leave Jacob, and Lucille brought them clean clothes and homemade food, visiting every day. But soon the military took over the camps, and visitors were no longer permitted. The situation deteriorated, and people were fighting for limited resources and a place to sleep.

Fans of the TV series Lost will enjoy this fast-paced, thought-provoking debut novel. Mott's theme of science versus faith will resonate with them. There is an interesting scene where the local reverend is watching a TV show in which a scientist is debating with a minister on who exactly these Returned are, and a man in the audience told them they were both useless as they had no definitive answers. In today's uncertain world, there are parallels to be made here.

The Returned is the kind of book that you will read in one sitting, but keep pondering its themes long after you finish. The plot draws you into this unfamiliar world, and you will identify with the characters, particularly Lucille and Harold. There are a few twists and turns and some exciting action along the way, and I think this book will appeal to so many different types of readers that it has the ability to become a real blockbuster.

Thanks to TLC Tours for including me on Jason Mott's tour. The rest of the tour stops are here:

Jason Mott's website is here.
Posted by (Diane) bookchickdi at 9:00 AM