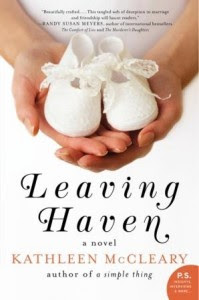 Leaving Haven is a wonderful novel about friendship, family and marriage. Georgia is married to John, a sexy, hardworking chef, and they have teenage daughter Liza. Georgia has been trying for years to have a second child, but she has suffered many miscarriages and has just about given up all hope when her best friend Alice offers to donate a egg.

Alice is married to Duncan, a practical, hardworking lawyer who provided a safe haven for Alice, the only child of a single woman who would frequently leave young Alice on her own while she worked and socialized. Their daughter Wren is best friends with Liza.

The novel opens with Georgia, having just given birth to her son, abandoning him at the hospital. John is frantic and calls Alice to help him with the baby, who won't stop crying. Why has Georgia left the baby and her family behind? She had postpartum depression when Liza was born, but what would make her leave this baby whom she so desperately wanted?

The chapters alternate between Alice and Georgia, as well as back in time, as we learn the story behind Georgia's disappearance. Alice and Georgia have two very different personalities. Alice describes Georgia as " open, honest, direct." She was "the quintessential earth mother, with her rambling old Victorian house and the bright colored skirts she wore (which she sewed herself) and her tendency to call everyone "darling" or "sweetie".  She even bakes cakes for a living, a nurturing profession.

Georgia lost her mom when she was twelve and became a mother figure to her younger sisters Polly and Chessy. Polly is mom to four youngsters and Chessy is the youngest, still trying to find herself, and the relationship among the sisters was my favorite part of the book; it was the one relationship that rang most true to me. I would love to see more of the sisters, maybe in a later book.

Alice was, according to Georgia, "all the things that Georgia wasn't- confident, organized, practical. Georgia felt reassured by Alice's steadiness, her unflappable common-sense approach to everything." Alice taught economics part-time at a local college, matching her personality.

While Georgia is on bedrest for the baby and going stir crazy, a problem arises between Liza and Wren. Alice would normally go to Georgia with this, but Georgia can't be upset right now. Duncan quit his job and took a much lower paying one without talking it over with Alice, and Alice's unreliable mother is moving to Argentina. All these things combine to make Alice feel unmoored and she makes a bad decision.

I have to admit to having a hard time understanding Alice and what she does, but this paragraph helped.


"I've never done anything out of passion in my whole life." Alice said. "I've been mature and responsible since I was four. And the bullying with Wren- it made me so angry; I didn't know what to do with all that feeling."

After reading that, I had a better handle on Alice and I'm sure that there will be more than a few people who read that and understand where she is coming from.

I enjoyed the locales that appeared in the book- the Amtrak train to Albany, Rehoboth Beach in Delaware and Kramerbooks in Washington D.C. are all places I am familiar with, and I got a kick out of seeing them here.

The book could have become a little nighttime soap-opera-y, but McCleary makes the reader feel for the people and root for them to work it all out. I liked that the ending is open, as this is a situation that can't be resolved overnight or in a month or a year.

Thanks to TLC Tours  for including me on Kathleen McCleary's tour. The rest of the tour can be found here.