Mind Without a Home by Kristina Morgan 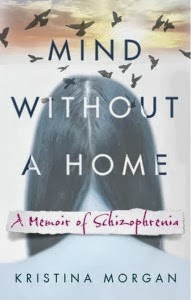 Kristina Morgan opens the prologue of her memoir Mind Without a Home in September of 1993 when she is twenty-nine years old. She has been sober for eleven years, has overdosed seven times in three months and hears the voices of men and women urging to hurt herself and others. She gets drunk and tries to kill herself again but doesn't succeed.

From there we meet Kristina's family- Jeremy and Hannah, her parents, and sisters Rose and Hunter. Her parents married because Hannah was pregnant with Kristina. Over the years, Hannah became an alcoholic, Rose became a sleepwalker and occasionally used drugs, Hunter was a heavy drug user and Kristina had schizophrenia and was an alcoholic.

Kristina's family had a lot of issues, but luckily she had two sets of grandparents who, at various times in her adult life when she needed them most, took her in. I really felt for them, trying their best to help their granddaughter through the many hospitalizations.

The book shows what it is like to live with mental illness, a topic that we have seen in the news recently and really needs to be addressed by society. Kristina hid her illness for a long time, but finally, like many who suffer from paranoid schizophrenia, it comes to surface in her late twenties.

She describes mental illness as a "Stephen King novel. I knew it was there, I knew something was happening, but the first 300 pages it had to yet to reveal itself. I was on page 150. I still had time before my heart was cut out and my mind completely poisoned."

The reader is dropped into her world, where she hears the constant hum of voices, is heavily medicated, sleeps for long hours at a time, can't get or hold a job, moves from place to place when roommates can no longer put up with her behavior, deals with frequent hospitalizations, and tries desperately to find and hold onto a mate.

Kristina gets a job as a high school English teacher, which she loves, but loses it when the principal discovers her history. It devastates Kristina, for teaching gives her structure and joy. She falls in love with men and women, but can't sustain a permanent relationship, although she does have long on-again-and-off-again relationships with a few people until they can't take it anymore.

Living in a big city, one sees many people sleeping on church steps, wandering the city during the day, and the assumption is that they have some sort of mental illness. The most important thing I got from this memoir is the feeling of empathy for those with mental illness. We are put into their shoes in this shattering memoir.

Morgan is a poet, and the language here is poetic. She uses imagery a great deal of the time, and anyone who enjoys poetry will probably get more from this book than others.  Near the end of the book, she writes a note titled "Dear Self" that beautifully sums up where she is. If I have a criticism, it is that it can be repetitive towards the end of the book.

Thanks to TLC Tours for allowing me to paticipate. The rest of Kristin'a tour is here: