Big Fish- On The Page and On The Stage 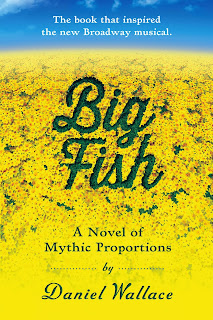 I recently saw the Broadway production of Big Fish, based on the 1998 novel by Daniel Wallace. Algonquin Books has re-released  the novel to coincide with the musical, and although I had seen the movie, I hadn't read the novel, subtitled "A Novel of Mythic Proportions."

First the book. William is a young adult who has never gotten to really know his father, Edward Bloom. Edward hid his true self behind mythic stories he told about his larger-than-life adventures, stories that frustrated William the older he got.

The elder Bloom recounted his encounter with a giant, how he met the girl in the river who came into his life at various points, and how he came to own an entire town, all of which made it into the Broadway show.

Bloom always wanted to be "the big fish in the little pond- that's what I wanted. That's what I wanted from day one." William didn't understand this; he only wanted his father to be home, but Edward was restless, and his job took him away for long stretches of time, something for which William resented him.

When Edward got sick and was close to death, all William wanted was an honest conversation with his dad, to find out who he was underneath all the jokes and fables he told his son. William was stunned to find that their yard started filling up with dozens of people who came to wait vigil for Edward.

It turns out that many of the stories his father told had some truth to them. At the end, Edward asks William to sneak him out of the hospital to a special place. William does this one last thing for his father, and in the end, Edward gets to show William that he is a big fish after all.

The story is mythological, and the magical elements bring whimsy to this novel about the difficult relationship that exists between fathers and sons. The Broadway show stars Norbert Leo Butz as Edward Bloom, and there isn't anyone who could play this part better. Kate Baldwin is radiant as Edward's wife and William's mother, and it is clear why Edward fell head over heels for this woman.

Susan Stroman directs and choreographs, so the dancing really matches the magic of the story, and Butz is a wonderful dancer as he has proved in many other shows. The girl in the river has been turned into a mermaid in the show, maybe to give it a more magical element. The dancing elephants from the circus scene (which is not in the book) are cleverly done and inspire awe.

A few of the scenes don't work as well, such as the war scene, which is also not in the book. The songs are not as memorable as the performances by Butz and Baldwin, but overall it is a good show. Unfortunately, the show is closing on December 29th, but if you can get a discounted ticket, I would recommend going just to see Butz's performance.

Posted by (Diane) bookchickdi at 4:27 PM