Buying In by Laura Hemphill 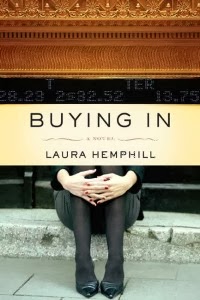 Last year I read a dynamite book about a woman working at one of Wall Street's big banks, Erin Duffy's Bond Girl. I loved it, putting it on my Best Of The Year list. Recently I had the opportunity to read another debut novel in the same setting by a woman who also worked in the industry, like Duffy. My return to that world was rewarded with another terrific read, Laura Hemphill's Buying In.

Sophie Landgraf grew up in a small town to parents who owned a sheep farm. They were hippies, and none too happy when their  child decided to get a degree in finance and pursue a job with Sterling, one of the big New York City banks.

One of the first things we see Sophie doing is going through the desk drawers of the people whom she works for, trying to understand something about them. I liked this quirk of Sophie, and it gave us a look at the secret side of these single-minded people. She goes through her boss Ethan's desk.


"One peek inside his top drawer had been enough for Sophie. Swimming goggles, nail clippers, a Ferragamo tie wound into a tight coil, and packets of Gulden's Spicy Brown Mustard. None of that compared to Ira Blumenstein's gold tooth, Kenneth Yang's Darth Vader lollipop, or Rich Angstrom's Magic 8 Ball."

Sophie is a first year hire, so she does all of the grunt work: research and plugging numbers into Excel formulas, then analyzing the data. This world is so foreign to me, and I was fascinated by my immersion into it, thanks to Hemphill's skilled storytelling.

Ethan's team consists of Vasu, an Indian man with a wife and two children he loves but rarely sees, and Sophie. They work in the Industrials division, and their big project is convincing their client AlumiCorp that they should merge with another aluminum manufacturer, whether or not it is in the best interest of their client. This would bring Sterling huge fees, along with a gig as a consultant to the newly formed company.

If you had told me that I would find a novel about a big bank and the aluminum industry so intriguing, I would have said "I don't think so." And yet that is exactly what happened. As the merger goes through ups and downs, at times looking like it was all going to go down in flames, the tension builds and Hemphill has the reader on the edge of her seat, like a great spy thriller.

The story is told through four different points of view- Sophie, Vasu, Ethan and the CEO of AlumiCorp. Sophie's story is more prevalent, but Vasu's is the one that is heartbreaking, and I would have liked to have heard more from him.

There is one vignette that I also read in Duffy's Bond Girl. Two men compete to eat one of each of the items in the vending machine. Sophie was a referee for this contest (as was Duff's female protagonist), so I'm going to guess that this is something that goes on at all big banks. It epitomizes the testosterone driven mentality that exists. Vasu compares Sterling and all of the other banks who caused the subprime economic crisis to the Vending Machine Challenge guy, who "swallow(s) too much too fast, (then) throw(s) up."

The novel takes place just prior to the Lehman collapse, and like many of the other banks, Sterling is in trouble for their reckless ways, affecting all of the major characters. We see that for all of their sacrifices- having no social life, missing holidays with family, working insane hours- their loyalty and hard work means nothing to a corporation.

I bought into Buying In. I was swept into this crazy world of high finance along with Sophie, and taken on a fast-paced ride learning more about aluminum factories that I thought possible, and liking it. This is a smart novel, and one that will have you turning the pages to see how it all comes crashing down, and if Sophie is a survivor.

Thanks to TLC Tours for inviting me to participate. The rest of Laura Hemphill's tour is here: