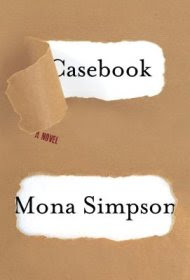 As Mona Simpson's newest novel, Casebook opens, Miles is twelve years old when his parents separate. His mom, Irene (whom he calls the Mims) is a mathematician, not an occupation you find frequently in novels. His father Evan is a lawyer in the entertainment industry and they live in Los Angeles.

He has younger twin sisters whom he calls Boop One and Boop Two. His best friend Hector's parents aren't together either. Hector has a bit of a crush on the Mims, and he is more than willing to help Miles figure out why Mims and Evans are separated and whether they are headed towards divorce.

Miles has heard rumblings that Mims cheated on his dad, and to find out the truth he rigs up a phone extension so that he can listen to his mother's phone conversations. Mims soon begins dating Eli, who works for the National Service Foundation in Washington.

Eli seems like a good guy, but he is in the midst of a divorce from his wife and he misses his young son. His mother recently died, and he has a brother who has mental health issues. Eli promises Mims that he will move out to Los Angeles and they will be a family, she just has to give him time. And more time. And more time. And then he has to take care of his dying cat, who seems to hang on forever.

Miles and Hector become suspicious of Eli, so they seek out a private investigator, whose jobs usually consist of background checks on reality show contestants (Big Brother, The Bachelor), but there is something about these boys that gets to him, and he agrees to help them without pay.

It took me awhile to get into Casebook, but about halfway in, I fell in love. Miles and Hector are such real, wonderful boys, trying to make sense of an adult world. Mims got to me too; she so wants this relationship with Eli to be the real deal.

Simpson creates believable characters that you feel you know. Her description of Sare, one of Mims's friends is a good example.


"She was way cooler than my parents. Sare was a very smart person who never tried anything too hard for her. She had that confidence and that boredom."


My only criticism of the book is that there are many characters, and at first it is difficult to keep track of who belonged to whom. And the fact that Miles had nicknames for his mom and sisters confused me when other characters called them by their given names.

Miles and Hector write a comic book based partly on Eli, and I'm glad we get to see the results of their work. Hector also has footnotes in the book, giving his point of view on things that Miles has written about him, which adds a unique perspective.

The ending is poignant, much like Is This Tomorrow?, and if you liked that novel, you will love Casebook, as I did. It's a beautiful coming-of-age story, sure to touch your heart.

My review of Is This Tomorrow? is here.

Thanks to TLC Tours for putting me on Mona Simpson's tour. The rest of her stops are here: