On The Rocks by Erin Duffy 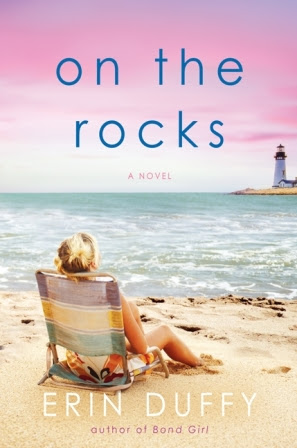 Erin Dufy's debut novel, Bond Girl, dropped the reader into the crazy Wall Street world of financial analysts. Through the eyes of her protagonist, fresh out of business school and working her first big job, we saw the insane hours, the misogynist attitudes of some of her colleagues and clients, and the crazy things that people did to blow off steam. It made my list as one of the Most Compelling Books of 2012.

Her new novel, On The Rocks, tells the story of Abby, a Boston Catholic school kindergarten teacher who finds out from a posting on Facebook that her fiancee has dumped her- while she was trying on wedding gowns. Abby falls completely apart, humiliated in front of her family and friends. She refuses to leave her apartment, and fills her refrigerator with pints of ice cream.

Abby's best friend Grace has a line on a summer rental in Newport, Rhode Island and sees this as a way for Abby to escape from Boston and get her life back on track. Grace will be there on the weekends, so she encourages Abby to look for a job and get back into the dating world.

Bobby is an unemployed lawyer who knows Grace, and along with his friend, Wolf, a German working on his English skills and trying to meet girls, they all hang out together. Bobby is a smart ass, but he is willing to be Abby's wingman, help her meet guys, and school her in the new ways of social media dating.

And boy does she need help. Grace is furious to discover that Abby's ex-fiance, who moved away and compared Abby to "a really, really comfortable sock that you've had forever and love, so you keep it, even though you know it's time to replace it," is texting Abby and Abby is answering him back.

Grace has her own problem; she is involved with a married lawyer at her firm who swears he is leaving his wife for her. Abby would like Grace to see other men, but it is not worth fighting over with Grace.
They get into a vicious fight one night in front of Bobby and he is shocked over the awful things they say to each other. (I was kind of shocked too.)

The characters here, as in Duffy's first book, are so well drawn, you feel like you know them. As I was reading On The Rocks, I felt like I was one of the group, hanging out with Abby, Grace, Bobby and Wolf on the beach, going to bars, eating seafood on the deck. Duffy has an uncanny ability to put the reader right there with them.

Bobby and Grace tell Abby that she is being too picky, and then to prove their point, Abby reels off a list of deal breakers.


"Well, I mean I don't think I could date a guy who chews with his mouth open. I have no patience for guys with bad table manners. I won't be able to handle anyone who eats like a Neanderthal. Oh, and he can't be a Jets fan. God, I could never date a Jets fan...And he needs to have good teeth. This day and age, there is no excuse for an overbite." I didn't care if Grace thought this was hypercritical. I like a nice smile. Sue me.

Duffy puts humor in this tale that made me laugh out loud. When Abby tried to restore some order to her life by organizing her apartment, going so far as to alphabetize her spice rack "so she could locate the cinnamon right next to the cloves should some sort of spontaneous bake-off erupt in my apartment", I chortled.

Abby's mom reminded me of the mother character in Carrie Fisher's novel, Postcards From The Edge, played memorably in the movie by Shirley McLaine. Her mother is devastated that the wedding has been called off because she couldn't wait for everyone to see how good she looked. She ends up wearing a bridal gown to her younger daughter's wedding, as if it was her own wedding. She is a piece of work.

Bobby is my favorite character in the novel. He seems to like Abby more than he lets on, but he does his best to set her up with other guys. He is funny, charming, a freeloader (always coming over for beer, food and cigarettes), but he seems to be a genuine good guy. Watching Abby and Bobby's budding friendship is one of the highlights of the novel.

On The Rocks is the perfect book to drop in your bag as you head for spring break or look forward to summers on the beach. I'd love to run into Abby, Bobby and the gang again in a future novel.

rating 5 of 5
My review of Bond Girl is here.

Thanks to TLC Tours for putting me on Erin Duffy's tour. The rest of the stops are here.