Lisa See in Conversation With Adriana Trigiani at Barnes & Noble

Last week I had the pleasure of attending a terrific conversation between Adriana Trigiani and Lisa See at Barnes & Noble Union Square in NYC about Lisa's newest novel, China Dolls, which has a gorgeous cover. 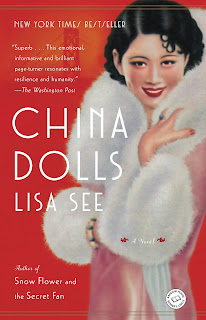 The novel tells the story of three young Asian women who work in a Forbidden City nightclub in 1938 San Francisco. Like her previous novels, this one was also thoroughly researched, and on her website she has posted fascinating interviews she did with three women who performed on the Chop Suey circuit (similar to the Chitlin Circuit of the South) here.

One of the interviewees is called Mai Tai, and yes, the drink was named after her. See ran into a man who knew Mai Tai at a book signing, and he laughed and then began to list some of the famous men she slept with from Hollywood.

See's great-great grandfather came to the United States and ended up becoming the patriarch of Chinatown in Los Angeles. See has 400 relatives on her father's side, most Asian, but her mother's family is very small. (Her mother is author Carolyn See.)

Although See doesn't look Asian, she identifies heavily with her father's side of the family because as she said "we identify with people around us, they're our mirror." And so many of her novels, such as the popular Shanghai Girls and its sequel Dreams of Joy, have Chinese protagonists.

Trigiani asked See, whom she called "a real storyteller" about her writing life. See is an early riser and staggers to her office answering emails while her husband exercises to his Eminem music playing loudly.

She must write 1000 words a day, which as she points out "isn't that much, about four pages." If she has written 997 words, she forces herself to come up with three more words, proving her mother's point that "the word control freak was invented for me."

See doesn't outline her books, but she does start with the last sentence first, so she knows where she's going emotionally. She said that sometimes the characters will take her in a completely different direction that she thought she would be going.

See spoke lovingly of her husband, a lawyer whom she says is very handsome, even asking for corroboration from her cousin who was in the audience. They have been married for 33 years, which drew a round of applause from the crowd. She said that her "rock solid life" helps her work life and reflects that.

In discussing China Dolls, See spoke of her research, of how on the Chop Suey circuit of the 1930s and 40s there was an Chinese Sinatra, a Chinese Houdini and a Chinese Fred Astaire and Ginger Rogers. From this research came her three main characters: Grace, who ran away from an abusive home life in Ohio, Helen, who grew up in a traditional Chinese compound home in San Francisco's Chinatown, and Ruby, a Japanese girl posing as Chinese.

Ruby is "unlike any character I have written" See said. "She loves sailors and they love her!". Trigiani said "I've never read a character like her- you blew it apart. You showed a real sense of diversity in the Asian community."

In the Q&A section, someone asked See about the Tiger Mom controversy. See said she didn't see the big deal, students should be studying and working hard. In the Asian community there is respect for elders and family, and immigrants see education as a path to keep moving forward.

One thing she said that I found intriguing was that "all of us have someone who was scared enough and brave enough to leave their country to come here." That struck a chord with me and many others I'm sure.

A few of the women at the event were not familiar with Adriana Trigiani and were totally charmed by her, asking me about her books. Her latest, The Supreme Macaroni Company is now in paperback and I highly recommend it. (My review is here.)

I'm looking forward to reading China Dolls, and will post a review when I do. For more information on China Dolls,  go to See's website here.
My review of Shanghai Girls is here.