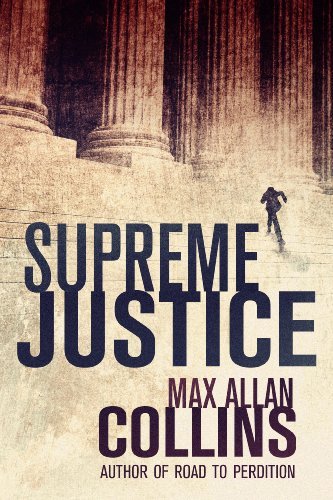 Joseph Reeder is a former Secret Service agent who took a bullet for the president, a man whom he didn't respect and whose conservative politics he did not like in Max Allan Collins' political thriller Supreme Justice. His politics put him at odds with his superiors and coworkers, and he compared himself to Pete Rose, who didn't get into baseball's Hall of Fame due to his gambling, saying that, like Rose, "he accomplished great things, but would spend eternity on the outside."

Reeder now owns a private security company, and is called into help when a very conservative Supreme Court justice is killed during a robbery at a restaurant where Reeder's company provides security. After viewing the security camera footage, Reeder concludes that the justice was targeted, and the robbery was a coverup for murder.

A task force investigating the case, consisting of DC local police, FBI and Homeland Security, are all protecting their turf and squabbling amongst themselves as to who the culprit is and what their motives are. Reeder's murder theory is dismissed until another incident occurs, and now Reeder wonders if someone is targeting conservative justices, trying to change the direction of the Supreme Court after they have overturned Roe v Wade and made abortion illegal.

The new president is a liberal, and if he can appoint more liberal justices, abortion could be made legal again. But would someone in the White House go so far as to eliminate justices to change the law back? It is an intriguing premise for this action-packed novel.

Reeder is paired with a young female FBI agent, and his relationships with his former coworkers come into play here. They have to investigate on their own, being careful not to tip off anyone who may be involved in the murder.

Supreme Justice is a fast-paced thriller, heavier on the action than on character development. It is the kind of summer read that you can polish off at a day at the beach, quickly turning the pages to find out if Reeder's theory is the right one. Careful readers may be able to figure out who the culprit is, although there are plenty of red herrings here to throw the reader off track.

As I was reading this, I thought that if it was the 1980's, this would make a perfect Clint Eastwood movie: Reeder is a loner, an honorable man, loyal to his values who ends up caught in a situation only he can resolve.

I'm sure we haven't seen the last of Joe Reeder; this is the kind of character who could conceivably spawn an entire series of thrillers for those who like their action spiked with a dose of political intrigue.

Thanks to TLC Tours for putting me on this tour. The rest of Max Allan Collins stops are here.

Posted by (Diane) bookchickdi at 8:08 AM