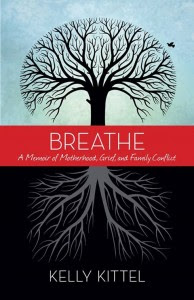 Kelly Kittel's book, Breathe, is subtitled A Memoir of Motherhood, Grief and Family Conflict, so you know before beginning it that you'd better have the tissues ready.

Kelly always wanted to have a big family. She and her husband Andy have three young children, Hannah, Christiana and Micah, when she happily discovers that she is pregnant with their fourth child. They rent a home from Andy's older sister Cody and her husband, who live across the street from them.

Andy is the youngest of eight children, and his siblings and parents are never shy about telling Andy and Kelly how to live their lives. They are particularly adamant in telling Andy that four children are enough and encourage him to get a vasectomy, even if he has to go behind Kelly's back to do it.

Kelly's East Coast, Mayflower ancestor family is very different from Andy's raucous, emotional family, and anyone who is married may understand how difficult it can be learning to get along with people so dissimilar from your own family.

Baby Noah is born, and all is well. Kelly and Andy are happy with their family, though Cody's constant need to control everyone around her is grating on Kelly. Cody's teenage daughters' disrespectful attitude towards them is also a problem.

While attending a family reunion at Andy's parents, Cody's daughter Cally accidentally runs over 15 month-old Noah and he has a traumatic brain injury. He is helicoptered to a nearby hospital, but when Andy and Kelly arrive, they are told that Noah was being kept alive with machines only long enough for them to say goodbye.

Noah's death devastates the family. Kelly and Andy wait for an apology from Cally, but it never comes.   They try to get Cally and Cody to come with them to counseling to try and get through it, but Cody refuses. Kelly asks Cody to please sell the Tahoe that ran over her son because it pains her to see it sitting in the driveway across the street, but Cody refuses.

Kelly finds herself pregnant again and hopes that new life with bring the family some joy. While her first four pregnancies were uneventful, she has problems with her blood pressure this time and has to see a specialist.

Kelly chose a women's practice that has many midwives on staff, and she seems to see a different one every time. Her blood pressure is frequently measured, and she sees the doctor or midwife at least once a week, and even every day near the end when she is put on bed rest.

There comes a time when Kelly is at the hospital and has to decide whether to induce labor or wait a little longer to allow the baby's lungs to grow more mature. She is not given all the information she needs and decides to wait.

That decision cost her baby Jonah his life. Kelly has a placental abruption and Jonah dies in utero. Kelly and Andy have to tell their young children that they have once again lost a brother, and this second death in nine months is almost more than they can take.

Andy's family seems to want to blame Kelly for Jonah and Noah's deaths. They treat her horribly, and eventually Kelly convinces Andy to move away from his family in Oregon across the country to Rhode Island where her family lives.

Kelly becomes pregnant again, and is shocked when her new doctor reviews her previous medical history and tells her that Jonah never should have died. Her doctors and the hospital were negligent. Kelly and Andy decide to sue the doctor.

This decision causes a permanent rift in Andy's family, with his sisters siding with the negligent doctor.  This floors Andy and Kelly. The courtroom scenes are as riveting as any John Grisham novel, but all this is true.

Cody actually testifies for the defense, and it is so hard to believe that anyone could do that to their own flesh and blood. Her behavior is appalling. Cody's daughters, including Cally, sit daily in the courtroom, taunting Andy and Kelly with their smirks and looks and reporting back to Cody what was happening in the courtroom.

Kelly suffers many more miscarriages, and I don't know where she has the faith to keep trying. I could never do that. Reading Breathe I was struck by Andy and Kelly's strength, by what loving, wonderful parents they are to their children and how deeply committed they are to their family. The fact that they were abandoned by Andy's family makes that hurt so much more.

I took away a few important things from Kelly's book; one is the importance of doing your research when it comes to choosing doctors and understanding your medical options. You cannot rely only on what your doctor tells you.

The other is that if you are in a toxic relationship, no matter who it is with, you must get out of it. You cannot change other people, you can only change your reaction. Don't let unhappy people take you down with them.

Breathe is such an incredible story, if you told me it was fiction I would say you had quite an imagination. The fact that this is all true makes it all the more remarkable. That Kelly Kittel lived through it is amazing, the fact that she lived it all over again writing a book about it is astonishing.

Thanks to TLC Tours for putting me on Kelly Kittel's tour. The rest of the stops are here.