The Virtues of Oxygen by Susan Schoenberger 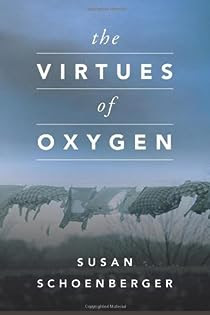 When I read the description of Susan Schoenberger's novel, The Virtues of Oxygen, about a woman struck by polio as a child who lived her life in iron lung, I knew I wanted to read this book.

As a child, my mother would drive by this certain house in her hometown and tell us that a young girl she knew had polio and lived in an iron lung. Her parents would position the machine in the front window so that the girl could see the cars go by and people could wave to her. That story had such an impact on me.

Vivian is just a young girl of six and her sister Darlene is ten when the girls contract polio. Darlene dies, and Viv can only survive in an iron lung, with just her head and neck outside the machine. Her parents take good care of Viv, as she requires round the clock care.

They move from their farm to town, and as her parents age, people from the town volunteer to sit with Viv to keep her company and make sure that she is okay. One of her caretaker volunteers is Holly, a young widow with two sons. Holly lost her husband and now has serious financial troubles.

Her mother helps when she can, but soon the situation changes. Holly's mom has a disabling stroke and  the newspaper where she works may not survive. The town in upstate New York where they live is suffering greatly from the recession. Manufacturing is closing, people are losing their jobs and their homes, and Holly is struggling to make her mortgage payments and may lose the house she and her husband worked so hard to make their own.


"her goals have become crude and basic. To maintain their home. To stay out of the homeless shelter. To keep her boys from being filleted and boneless. To prevent her children from knowing just how poor they might become."

Viv invests in a Cash For Gold store in town, and hires Holly part-time to help her by dealing with the store's operator, a handsome man named Racine. Holly and Racine become friendly, but Holly has doubts about Racine and the whole business. She fears Viv may lose her money.

Schoenberger brilliantly captures the feel of what it's like to live in a small town at a time of economic troubles. The way people support each other, but also the fear of what is to become of them, watching their lives and town change due to circumstances beyond their control.

Her characters feel like people I could know, especially Holly. She is a good mom, daughter and friend, trying to do what's right, but she is so close to losing everything she holds dear, her fear is palpable on the page.

Viv is also an amazing character. She is "the spiritual center of town", and she truly means the world to everyone there. Although she has her times of (deserved) self-pity, she made the most of her life, learning how computers work, even going to college and becoming a stock market whiz. When she talks wistfully of her death and how if she had died like her sister her parents would have been free to grieve and start over, it was like a punch to the stomach to read.

I became so emotionally invested in The Virtues of Oxygen, this beautiful story hit me where I live. The characters are honest, and the story will resonate with anyone who has faced struggles in their own life. It is one of the best books I have read this year, one that I will recommend to anyone who asks me, "What's a good book to read next?"

Thanks to TLC Tours for putting me on Susan's tour. The rest of the stops are here.